The following is an account of the National Party’s recent economics conference, submitted by an attendee of the event.

“…a dream that was dreamed in the heart, and that only the heart could hold.” — Pádraig Mac Piarais, The Fool

An incredible event took place on Saturday 26 February 2022. The first large scale conference by the National Party in 2022 and the first since the lifting of COVID-19 restrictions. A crowd gathered from across the island of Ireland to hear their ceannaire, Justin Barrett, deliver a lecture on his recent pamphlet, The Nationalist Reset. The event was packed, security was tight, the attendees were now among their own. Nationalists gathered as one body, all aware of the great weight we had upon our shoulders. All focused on one goal, the reclaiming of our homeland.

In the great room where the Irish patriots had gathered there was a very unique atmosphere. A family atmosphere. A closeness that is not found at the usual political gatherings. The people gathered came from all walks of life; young and old, public sector workers, manual workers, workers on zero hour contracts, farmers, self-employed, business owners and students, male and female. This wide demographic reflects what is happening in our country today. Nationalism is on the rise.

As the Party leader took his place at the podium and began his speech, you could have heard a pin drop. All eyes in the room were fixed on the speaker. There was an intense atmosphere as he outlined in depth his economic philosophy on moving forward into a better future for Ireland. This short article will not even attempt to outline the thrust or focus of the speech, which can be found online, and is absolutely vital. It is sufficient to say that the presentation was very powerful, very detailed and extremely engaging. It received a huge response from attendees. Justin Barrett speaks from the heart. He speaks with passion. With devotion, with commitment. He absolutely means it. To those who have come to hear him, this is incredibly energising, incredibly inspirational. To his enemies, he must terrify them! These leftists and globalists cannot even begin to comprehend the Justin Barretts of this world. Their whole raison d’etre is destructive nihilism, while the Justin Barretts pursue “a dream that was dreamed in the heart, and that only the heart could hold.” The enemies of our country, of our people, are terrified of the brutal truth and honesty of what the National Party represents. That is why they push so hard to prevent the message that Nationalists promote.

Justin Barrett has produced a small but brilliant booklet, The Nationalist Reset, copies of which were available to attendees on the day. The booklet outlines the Nationalist economic policy, specifically the creation of a state bank, the ending of debt-bearing currency and the abolishing of interest slavery. In short, a radical transformation of the whole money-system, and one which places the human being at the centre of economic life. For us to develop the movement that will reclaim and rebuild Ireland, we must read this booklet. We must try to understand what it is we are fighting and what it is we are trying to achieve. 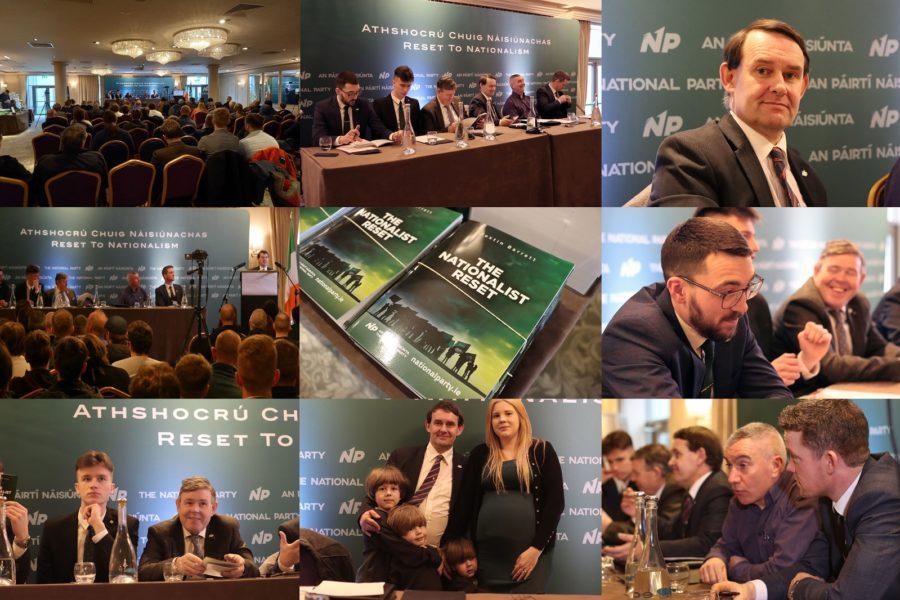 As was obvious on Saturday from the broad demographic of the members present, something is stirring. It is palpable, the rising tide of nationalism, and it is only commencing. This presents all of us with a huge task. We have been given this job in this historic moment. Our role is to build a movement. As a National Party flyer affirms, “Globalism is the virus. Nationalism is the cure”. Nationalism is the cure to the rapacious, destructive force which is capitalism. It is the cure to the despondency and hopelessness that is widespread. It is the cure for the destructiveness of cultural marxism and social decay.

Many movements have come and gone in Ireland, even only in the space of the past century. Many of them looked to have potential, however all ended by either becoming the enemy they once despised or simply disappeared into the dustbin of history. There is a thread that runs through these movements though. That thread is “compromise”. Many of them had “advisors” telling them that if only they would ditch this or that policy or principle, they would become more popular. Then once one principle is thrown out, it becomes easier to throw out the others. And so the hollowing out commences. The poachers become the game keepers. Often this was down to political immaturity, political ambition or naivety, or perhaps a mixture of all three.

Holding the line and remaining solid can only be realised if the movement’s position is based on principle, rather than the simple pursuit of power for power’s sake. When power comes, as it surely will, it will be on the basis that a significant number of the population have come to the principled position, rather than the movement abandoning its principles. Power will come because we have shown steadfastness, strength and resolve and have brought a significant number with us through our activities.

The first conference of 2022 highlighted that a wide selection of people across our population are now realising that the National Party is the vehicle and are making that commitment to join with others to help build the movement and take back our country. We know that this struggle is very difficult but without the vehicle, without the effort, the dedication and commitment, it is impossible. The National Party conference highlighted that despite the seemingly dark times upon us, the light of Nationalism is shining through and is getting stronger.