Irish nationalism is a separatist tradition. A tradition aware of the contagion of modernity. To separate from England was and is a necessary precondition to survival. England was in the 19th and early 20th century not simply a colonial occupier, it was the epicenter of an expansionist world idea —London the heartland of monopoly capitalism —that flame later carried forward by the imperial United States, as the postwar heir to global naval supremacy. The last 200 years have been defined and dominated by the money power residing in London and New York, cradled to the bosom of the Atlanticist powers, guarded by the fleets of Perfidious Albion and Yankee America.

Since the fall of the Berlin Wall, the western world has become more and more complacent under this liberal hegemony. From the mega corporations of Silicon Valley to the utopianism of the European Union, the idea of one integrated world with one dominant set of values has become only more pervasive. However, as new threats such as China emerge to challenge this secure view of the world, the centuries-old power structures begin to look more unstable. Opportunities are likely to arise for nations who seek to find ways to break from the liberal value system.

We separate in order to survive. Assimilation is death. Culture is not artifice in a museum. Culture is blood and sacrifice, history and heritage, as personal as one’s relationship to one’s own kin. The separatist tradition has bequeathed to us the possibility of an Irish future. The paradigm of the modern age is assimilate or separate. Assimilate into global capitalism or separate into national resistance. History will not remember those who assimilate.

James Stephens, founder of what became the Irish Republican Brotherhood, remarked on the Irish diaspora in the United States: “Unless our country is liberated, the Irish race will be absorbed in this country, in England and in many other places. We will lose our identity and eventually disappear from the face of the earth.” What was true of those diaspora communities is true of Ireland itself.

It was economic expediency that scattered generation after generation of Ireland’s young to the four winds. That same expediency, that same malevolent contempt for our nation is at work still. We may take our place on this earth for granted, but we too will be absorbed even in our own homeland. The power of demographics is clear as day in the North-East of this country, centuries after the Ulster plantation. And it is clear as day too in the streets of every town and city. A mere twenty years has done the work of centuries in assimilating Ireland into the global hodgepodge. That liberation which Stephens spoke of is still incomplete and upon it all our hopes continue to lie. But we must grow a spine. We must become territorial again. 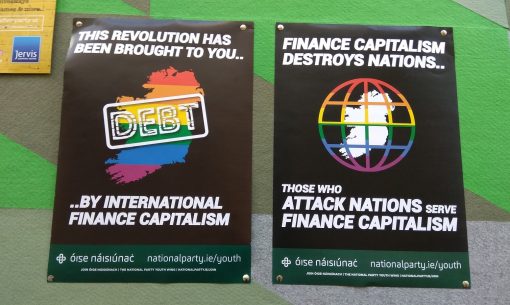 The revolution integrates everything. It has integrated the Marxist critique of capitalism. It has chewed up and spit out the class-struggle. It has cheered on Vladimir Lenin and it has cheered on Milton Friedman. It is the dialectic of the modern age. Its prophets are the Fabian liberals. Its apostles are the supranational technocrats. Its bards are the pop idols and the Hollywood celebrities. Its patrons are the mega corporations. Its enemies are all things national and rooted.

The late Zbigniew Brzezinski (globalist and technocrat) once wrote that we in the West are all Christians, all nationalists and all Marxists in the sense that we are the products of these “stages” of social development; historical Christianity, the rise of “modern” nation states, the doctrine of Marxism. Each in a sense represents to him a stage in a more developed humanism, leading us to a final synthesis, where Christian values, national particularism and doctrines of class struggle are all swept aside before the march of history. All integrated and conceptually vaporised. In a globalist society everything can be integrated. Everything dissolves finally into one system and one culture. Or rather that is the idea. For one must be careful to treat the promises of globalism as one would treat the promises of strangers.

The self-described liberals who traipse about the world with rose-tinted spectacles, projecting their rootlessness onto the people they encounter, are merely the end phase of what still might be called western imperialism, or its last and complete decadence. The drunk reaching out in his drunkenness for inexpressible human contact; seeking completion of the human project in total empathy, total openness, total sameness. For all the difference of emphasis, it is the same totality of vision that Cortés or Custer wielded against the alien peoples they made war against. But now grown old and lazy and debauched. It is an imperial frame of thought, still fixed inexorably on doomed conquests. Still looking for a total solution. And it is recognised by more and more people around the world as a disease. A disease intent on infecting all nations, all religions, all modes of community. If the Irish rebelled against anything 100 years ago, it was against that. And they rebelled in the cause of separation.

When they say to you “All people are the same!” what they are really saying is “All people are like me!” Me. Me. Me. That is the measure of their so-called humanism, or what is in reality the most debased brand of self-love and hopeless egoism. They look at humanity and see people who read the Guardian newspaper. They look at immigrants and see people as deracinated as themselves. It is a consumer-humanity. They see what they want to see.

The Irish, in their own inimitable way, have joined this zombie apocalypse of deracinated Europeans, wandering the world for the meaning they left behind, infecting everything they encounter with the same listless nihilism; the more self-aware of them content that they will die before they infect too many others. You will find out much more about the human condition, and about the world in general, by seeing it not through the eyes of backpackers, or European expats, or NGO workers, or eco-tourists, but through the eyes of the foreigners they encounter looking back at them. The Other to which they submit, stares back at them in full self-possession of his Otherness. That deracinated Westerner sublimates his identity before a foreigner; a foreigner who gains self-possession by demarcating himself against the Westerner as foreigner.

All meaning appears at the moment of demarcation. The moment where one thing is distinguished from another. The moment of judgment, the moment of choice, the moment of discrimination between what is true and what is false. Western social science for decades has obsessed over the Other. As though in terror of the human condition itself; the alarming reality that people make distinctions, prefer what is familiar as against what is different, prefer what is known as against what is unknown. The person who cannot see the foreigner cannot see himself or herself. They have lost all proportion and perspective. It is an anti-human humanism. It is the laziness of decadents.

The Fog of Relativism

It must be understood that both positions are untenable. Both positions are reductionist. Culture and people cannot so easily be separated. A culture cannot exist without a people or a people without a culture. And both of these things, people and culture, can be overwhelmed from without. To value a culture is to value a people. And if both things are in flux, that is not to say that either one is arbitrary. Change does not make all things arbitrary. Meaning remains contingent. Ireland, like any other nation, exists within a context. Remove the context and you have no Ireland.

Taken at face value, the liberal position is that you can replace every person in Ireland with a person from somewhere else, and that Ireland, the cultural construct, will remain essentially unaltered. That is to say no measurable degradation will occur in Irish nationality. “Come Out Ye Black and Tans” will trend on social media and everyone will still feel the same pounding in their hearts, the same sense of atavistic injustice, the same sense of communion with a nationality of people, the same sense of history and progression.

Culture is about context. If every person in the village is murdered then something dies with them. And their songs, though they may be sung, are not the same songs, and do not carry the same meaning. The feelings they evoke will never be the same feelings. Ditto, if the village is planted with foreigners, or its people displaced by economic ruin, or its ways of existing corroded by overwhelming change… A culture, like an ecosystem is delicate and can be destroyed. 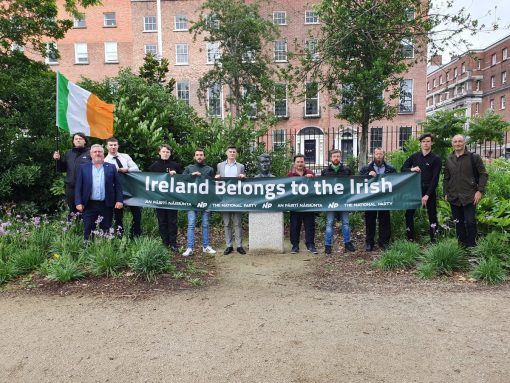 The idea of mass-immigration as a means of social engineering or even warfare should be quite familiar to Irish people. The word “plantation” is sharp in our historical memory. The six counties are a living example of the long term problems of state-promoted multiculturalism, demographic power games and the pervasiveness of ethnic loyalty. None of this should have to be explained to us.

Those people who promote mass-immigration into this country have an interest in transforming it. And they quite often have an ideal of what they want it to look like. But no authority in the land calls them to account. At no point are they obligated to justify their assertion. At no point is the moral superiority of their assertion questioned.

Mass-immigration is justified on the basis that:

The second argument is that nothing can be done. It has already happened. It is happening. It will continue to happen. This argument can also be dismissed because the people who make it would not apply the same logic to something they felt strongly about e.g. global warming, vegetarianism, overpopulation, famine. Either you care about something strongly enough or you don’t. If the destruction of the Irish people was inevitable it would still be our duty to fight against it. And if necessary to go down fighting.

The third argument is that immigration is a moral good. This we can also dismiss out of hand because we do not accept the destruction of the Irish people as a moral good.

At this point, the globalist will say, “There is no Irish people”. To which the only possible response can be: “If that is what you believe, then you better be prepared to risk all for that belief.”

To conclude, replacement level immigration is one of the central components of the globalist experiment. It is at the very heart of the economic and social interests that dominate our societies. We hear a lot of talk about moving beyond “flag-based identities.” But globalism too has its flag, its colours and its casualties. Nobody is talking about moving beyond that. That is the revolution which cannot be questioned. And its result, by process or design, is the transformation of human beings into more malleable economic units. Any assertion to national separatism must certainly rally against it.