The effects of mass-immigration on Irish nationhood have been immense, and nowhere is that so evident as in the much vaunted Citizenship Ceremonies which began in 2011. These events have received a significant amount of positive media attention and zero negative media attention. While immigration and naturalisation was already well underway pre-2011, it was at this point that we saw the process streamlined and packaged. The numbers of people granted citizenship in the period from 2011 to the present, indeed the extraordinary scale and pace of the process, have significantly distorted the 2016 census figures, particularly as they refer to foreign nationals. As of September 2018, 135 of these ceremonies had taken place at which about 86,000 applicants received certificates of naturalisation. If you include minors who are not required to attend the ceremonies, the number is 114,000.

In 2011 major reforms took place in the processing of citizenship applications, in order to deal with a growing backlog. This backlog was due to the huge increase in the volume of naturalisation applications between the years 2000 and 2010, when applications rose from 1,000 to 25,267.[1]

“These measures have resulted in a significant increase in the number of cases decided with double the volume of valid applications being decided in 2011, some 16,000, compared to 2010 when fewer than 8,000 were decided.”[2]

From March 2011, Alan Shatter, then Minister for Justice and Equality, oversaw the institution of Citizenship Ceremonies. “On taking up office, I had substantial concerns that no appropriate arrangements existed to give proper recognition to the importance of a person being granted Irish citizenship”.[3]

Having jumped to about 16,000 in 2011, the number of citizenship applications peaked in 2012 when 25,100 certificates were issued. Enda Kenny commented at the time in a video blog:

“…they bring with them a wealth of experience, their own traditions, their culture, their music, their sporting gifts, their culinary diversity and they add immeasurably to what we have here in Ireland. So I want to welcome them all and make them feel at home in this their new country. Because Ireland’s story is their story, and their story is our future.”

He did not mention any possible downsides, negatives or even challenges that might arise from the unprecedented scale of what was occurring. Ireland was being changed forever, but apparently in every way for the better.

In 2013 the figure was down to 24,262. It was reported that 93% of these (the 2013 figures) were non-EU citizens, with 7% coming from other EU countries. According to Eurostat the largest single group were Nigerians, accounting for 23% of citizenships granted in 2013. The Irish Times reported that “Ireland was the third main EU Member State granting citizenship to Indians (6.2%) and Pakistanis (5.7%) in 2013, behind Italy (2nd) and the United Kingdom (1st) in both cases”.[4]

By 2014, Frances Fitzgerald T.D., Minister for Justice and Equality, could announce that the 22,000 backlog of March 2011 had been comprehensively dealt with, despite “a significant increase in valid application volumes in the intervening period”.[5] It was reported that 90,000 applications had been processed since March 2011. While the numbers granted citizenship had decreased to 21,104 people, 14% of whom were citizens of another EU state, Eurostat could still report that during 2014 Ireland gave out more citizenships per head of population than any other EU country save Luxembourg.[6]

In 2015, according to an annual review, the numbers given citizenship had dropped to 13,500. It was during 2015 that the Ambassador of Ireland to Nigeria, Mr. Sean Hoy, made his famous remarks on Nigerian Visa Applicants. Mr. Hoy said that while census information might suggest a Nigerian population of 16,000, this figure was now distorted by the numbers granted citizenship. Hoy said that “when you become a nationalized Irish citizen you are no longer recorded in our statistics as a Nigerian, so I think the figure that we generally use is somewhere around 25,000 but it could be higher and it is certainly one of the largest groups living in Ireland”.[7]

“More than 100,000 persons from over 170 countries have become Irish citizens since citizenship ceremonies were introduced in 2011. We now have people from over 199 countries living in Ireland and the changing ethnic, linguistic and faith-based composition of our population presents many opportunities and challenges to policy-makers, institutions and local communities.”[8]

By the time Census 2016 came around, the Citizenship Ceremonies had had a significant distortive effect. Reports were that the number of foreign nationals had actually dropped. Part of the story revealed itself in the fact that 104,784 people were now claiming “dual nationality”, a figure up spectacularly by 55,905. 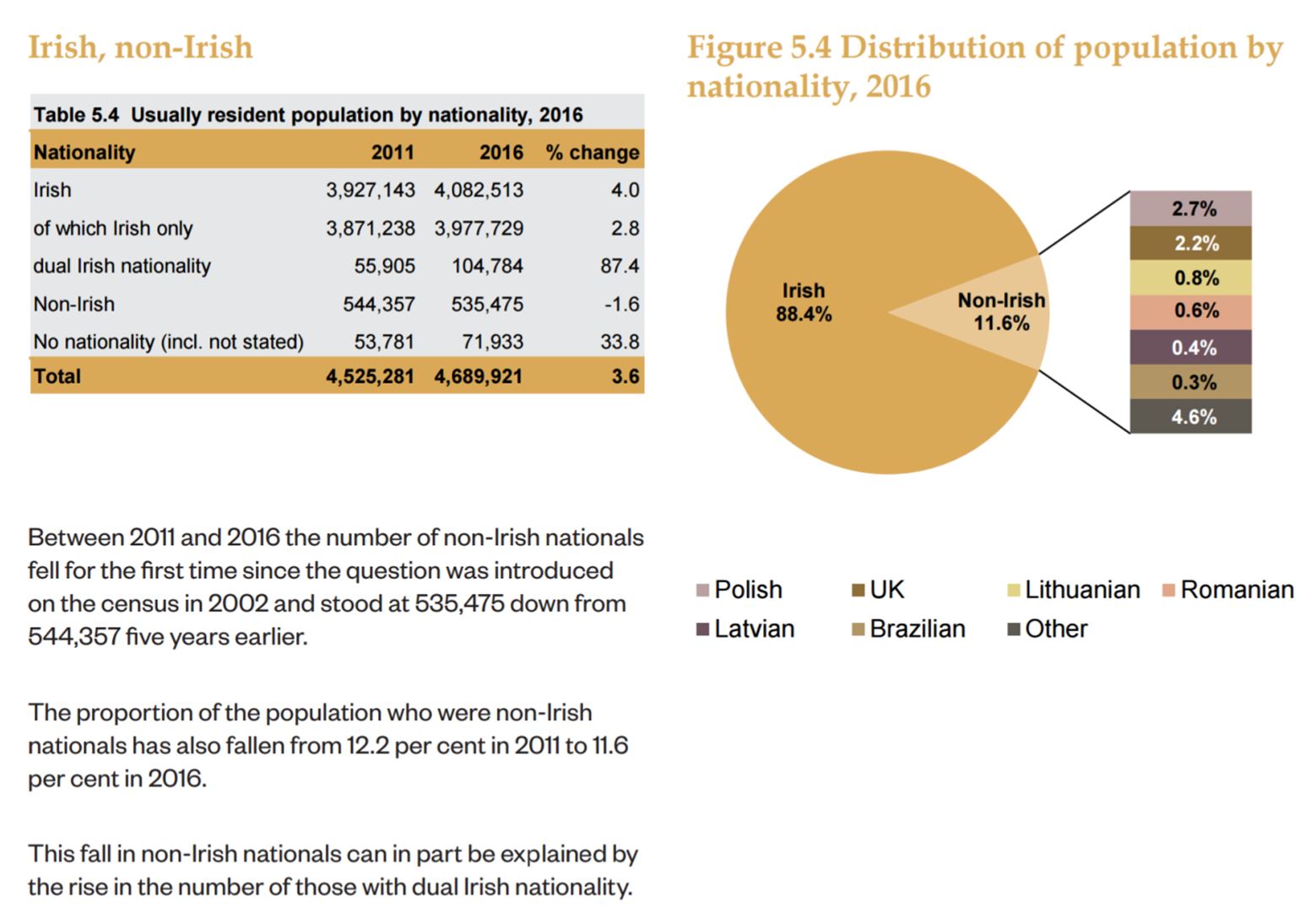 In Census 2016, Chapter 5: Diversity, p.50, it is suggested that the 94,000 new citizens “would appear to have had an impact on the large increase in the number of persons recorded as having dual nationality” instances of which increased by 48,879 in the five years.

The last figure is perhaps the most significant. That almost half of the adult immigrant population of non-EU origin had become full Irish citizens is extraordinary, and demonstrates the industrial scale of the Citizenship Ceremonies.

Mr. David Stanton, T.D, who launched the data, commented that:

“The immigrant population in Ireland now comprises a large group of immigrants with Irish citizenship who share the same rights and responsibilities as Irish citizens by birth or descent. Citizenship does not necessarily imply a sense of belonging, but the very significant increase in the numbers gaining citizenship indicates progress towards the fuller integration of immigrants in Ireland. Notwithstanding the considerable progress made, challenges remain for Ireland in integrating its large numbers of new immigrants.”[11]

You may well ask, if citizenship “does not necessarily imply a sense of belonging” then what good is it? In simply processing tens of thousands of people in this manner, what exactly are we trying to achieve? What exactly will there be for them to integrate into? All of these people now have the “same rights and responsibilities” as people whose whole existence, identity and heritage is rooted in the Irish soil. You cannot create such an anomaly without devaluing something. Either you are devaluing Irish citizenship or you are devaluing the “sense of belonging” which Mr. Stanton alludes to. Again, our politicians make no attempt to grasp or to comment on the deep, troubling implications of mass-immigration into this country. The analysis is paper thin, like the citizenship itself.

[6] ‘Ireland granted second highest level of citizenships in the EU in 2014’ Newstalk http://www.newstalk.com/Ireland-citizens-Eurostat-new-citizens-Nigeria-EU-babies-Morocco-UK-France-Germany