In this section we will look at the period after the economic downturn and how immigration (including the immigration which had already occurred) combined with large scale native emigration to further Ireland’s transformation.

The economic crash which occurred in 2007/ 2008 brought an end to the period of massive growth. In the years that followed, the big story became emigration as yet another generation of Irish young people travelled abroad in search of employment.

Emigration has been a strain on the records of Irish governments since the foundation of the Free State. And it has been a dark cloud hanging over Irish nationhood for much longer than that. The failure to provide an economic model that could support the indigenous Irish population has led to one exodus after another. The economic model, known to history as the Celtic Tiger, proved to be no different.

By contrast, outward migration increased dramatically. In the year up to April 2011 it had increased to 76,400. 40,000 of those individuals were Irish nationals. That is well over half and well up on previous years. On the other hand citizens of the ten assession states accounted for only 20% of the outward migration flow for that year, down significantly on the two years following the crash. So while the outward flow of Eastern Europeans was stabilising two years on from the downturn, the outward flow of native Irish was accelerating.

While immigrants did suffer heavy jobs losses in the immediate aftermath of the boom “simplistic assumptions of immigrants leaving Ireland with the onset of the recession are misplaced, with some continued employment, links to the social welfare system and social integration.”[2] While the economic downturn saw an outflow of native Irish, a large number of immigrants who had settled in Ireland chose to remain and after an initial drop their populations stabilised. The Polish population for instance remained relatively stable over the five years from 2011 to 2016. So while the downturn halted net-immigration, the displacement of the native population continued in a somewhat masked form.

“In a similar vein to what occurred with immigrants in Western European countries in the 1970s following the oil price shocks, most immigrants resident in Ireland have chosen to remain in the country despite the onset of severe economic recession. Indeed, immigrants have continued to arrive in Ireland, albeit in considerably lesser numbers than during the boom years.”[3]

Deirdre Cullen of the CSO said on Newstalk in September of 2016 that Ireland had lost 125,000 native Irish people during the five years since the previous census. That was “the difference between the immigrants and the emigrants.”[4] Whereas in the 1950s and the 1980s we simply lost our young people to immigration, in the most recent downturn we replaced them faster than they could leave.

One very obvious example of replacement can be seen in a 2017 report by the Royal College of Surgeons in Ireland (RCSI) entitled ‘Brain Drain to Brain Gain: Ireland’s Two-Way Flow of Doctors’. It describes how Ireland is training its own doctors for export and importing foreign doctors to take their places.[5] There are many similar examples in the health sector.

According to Pete Lunn of the ESRI, “Despite the deep recession, for the period 2006 to 2011 as a whole, Ireland experienced further net inward migration. Net inward migration was higher among those between their late twenties and late thirties, as well as among children.”[6] This statistic may be in part explained by “partners and children relocating to join family members who had arrived previously to work.”[7]

“The family situations and expectations of young adults who arrived in Ireland from elsewhere during the boom may have been quite different from those of their native counterparts. Most non-Irish immigrants to Ireland originate from countries with considerably lower per capita incomes and from cultures where people are inclined to marry and to have children at a younger age. (Lunn and Fahey, 2011). Thus, despite their more recent arrival in Ireland, some incentives faced by non-Irish immigrants may have made them less inclined to leave than young Irish adults.”[8]

Commenting on migration patterns by ethnicity he noted:

“In the White-Irish category, those aged 20-29 were significant net emigrants over the five year intercensal period, in contrast to any other age group of any other ethnicity. Within this native ethnic group in their twenties, more than one-in-ten men and one-in-twenty women emigrated between 2006 and 2011.”[9]

By contrast new “arrivals in the White-Other group were overwhelmingly immigrants from Eastern Europe. Immigration dominated emigration for this group and for the Black-Asian group.”[10]

The following too diagrams were published in an ESRI migration report for 2016. 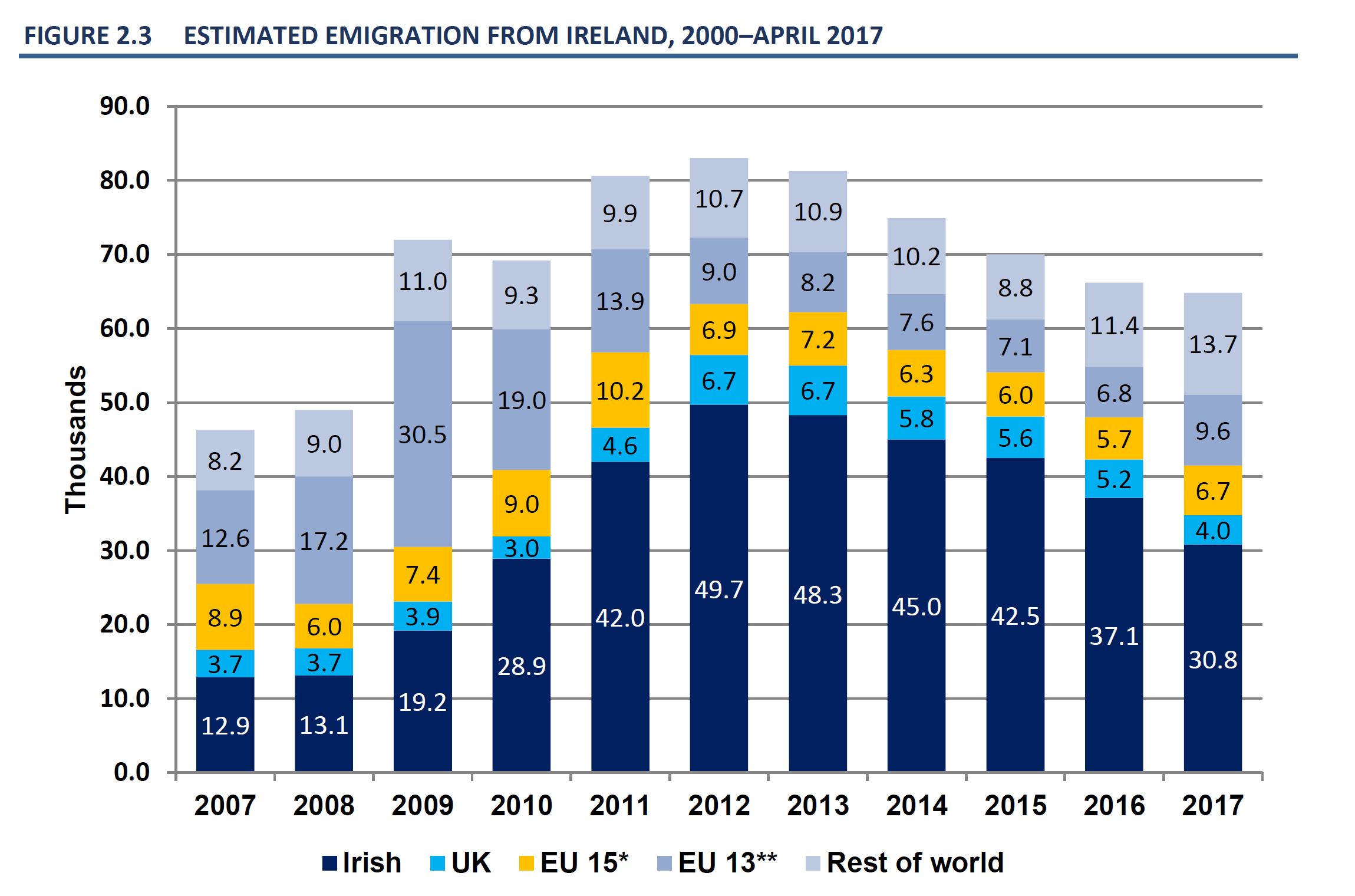 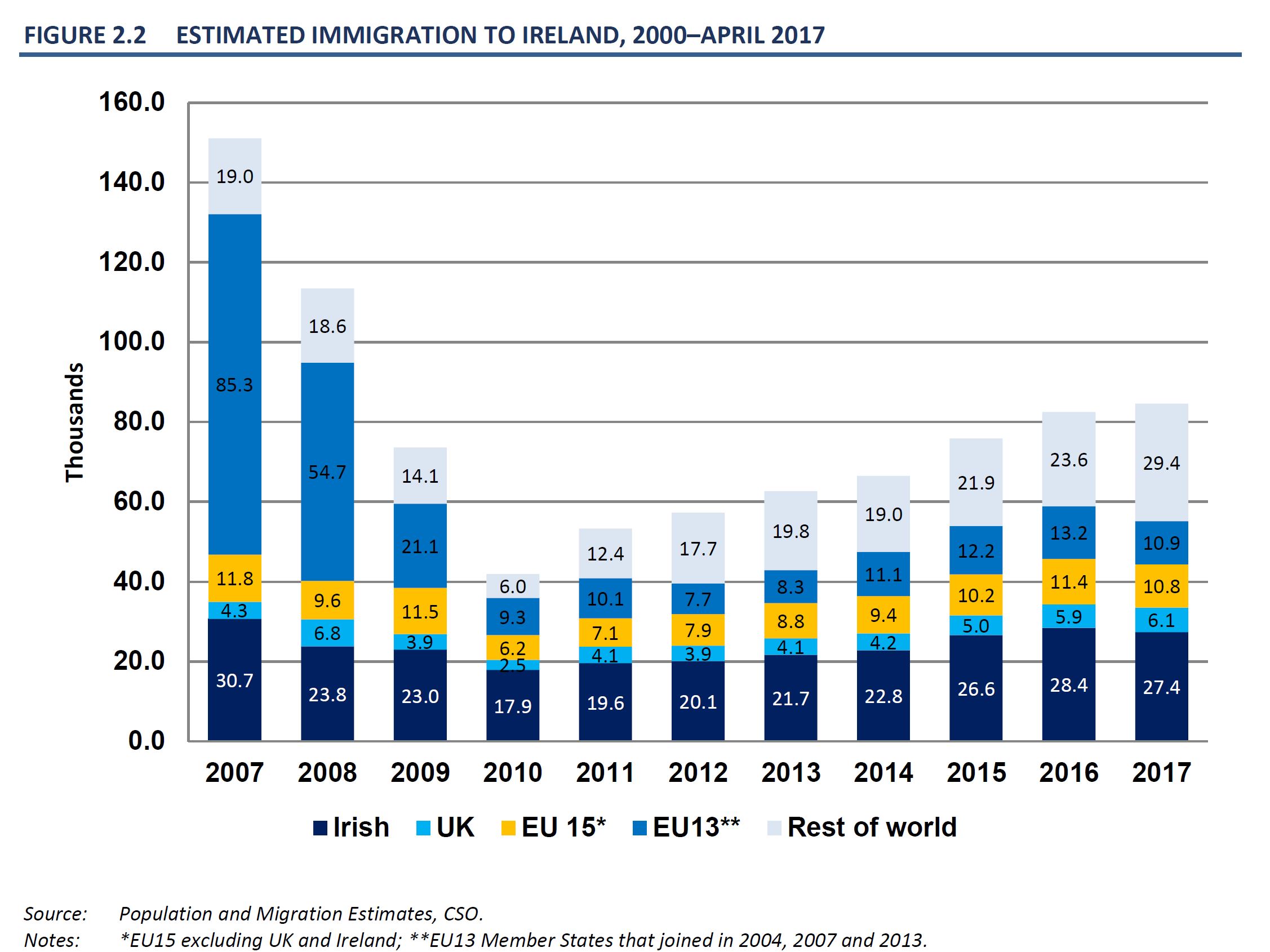 It can be seen that the outflow of Irish nationals increases dramatically in 2011 while stabilising somewhat in the other categories. For a five year period from approximately 2009 to 2015 Ireland experienced year on year net emigration.

While 2016 saw net immigration for the first time since 2009, there was still net outward migration of Irish nationals, albeit at a lower level than the previous year “falling from 23,200 to 10,700, while net inward migration among non-Irish nationals grew for the fourth year in a row, from 11,600 to 13,800.”

Even in 2018, ten years after the crash, emigration remains at more than twice the pre-2008 level, though this figure may now be permanently high as a result of the percentage of non-nationals in the country resulting in a more transient population. The CEO noted that of “the 76,200 people who emigrated in the year to April 2016, 31,800 (41.7%) were estimated to be Irish nationals”.[11]

A Society in Flux

Transience seems increasingly a characteristic of the Irish experience, at home and abroad. In January 2016 an OECD study found that one is six Irish born people lived abroad, which was the highest percentage of any OECD country.[12] At the same time, the United Nations reported in June 2016 that Ireland had one of the highest percentages of foreign born people of any European country.[13] One in six people in Ireland were said to be foreign born. According to the 2016 census, 17.3% of Irish people were born in a foreign country, up 0.3% from 2011.[14]

Data from the 2016 census shows fourteen electoral divisions where the percentages of foreign born are greater than those born inside the twenty six counties.

One of the most perverse uses of emigration has been as a means of presenting Ireland as an emigrant nation and therefore justifying the displacement of the Irish population by immigrants. John FitzGerlad in The Irish Times does exactly this when he writes.

“Ireland has so far avoided the populist anti-immigrant rhetoric that is a feature of politics in Britain, the US, and much of central Europe. It helps that every Irish family has its own migration story.”[15]

He goes on to praise Citizen Ceremonies as a great success. And from the point of view of displacing Irish people in their own homeland they have been a great success. Indeed it is to Citizen Ceremonies that we next turn. One of the most incredible developments of the past decade has been the rapid acceleration, beginning in 2011, with which Irish citizenship has been conferred on an extraordinary number of foreign nationals. The industrial scale of the Citizenship Ceremonies that ensued will be explored in detail in the next article. 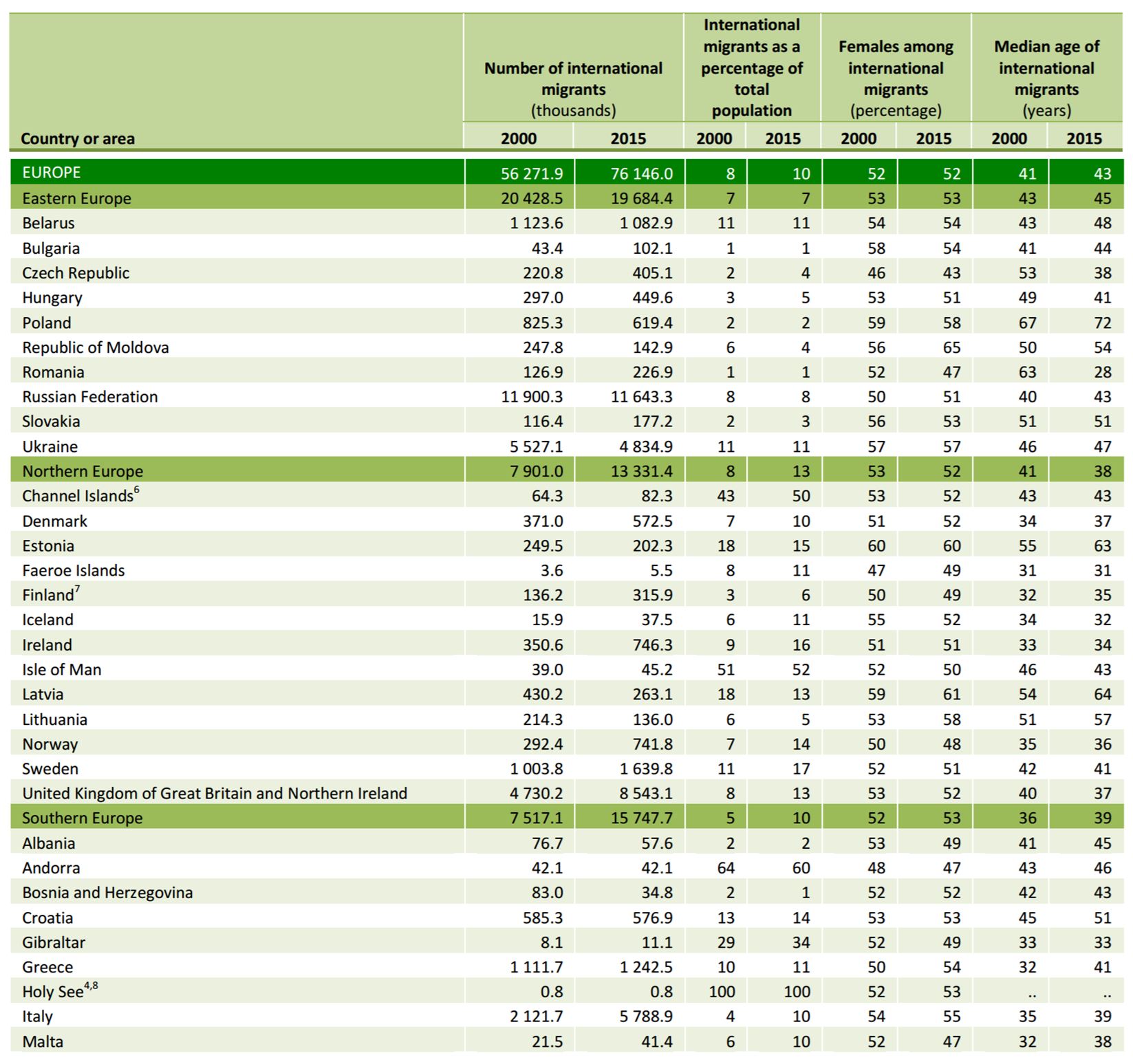 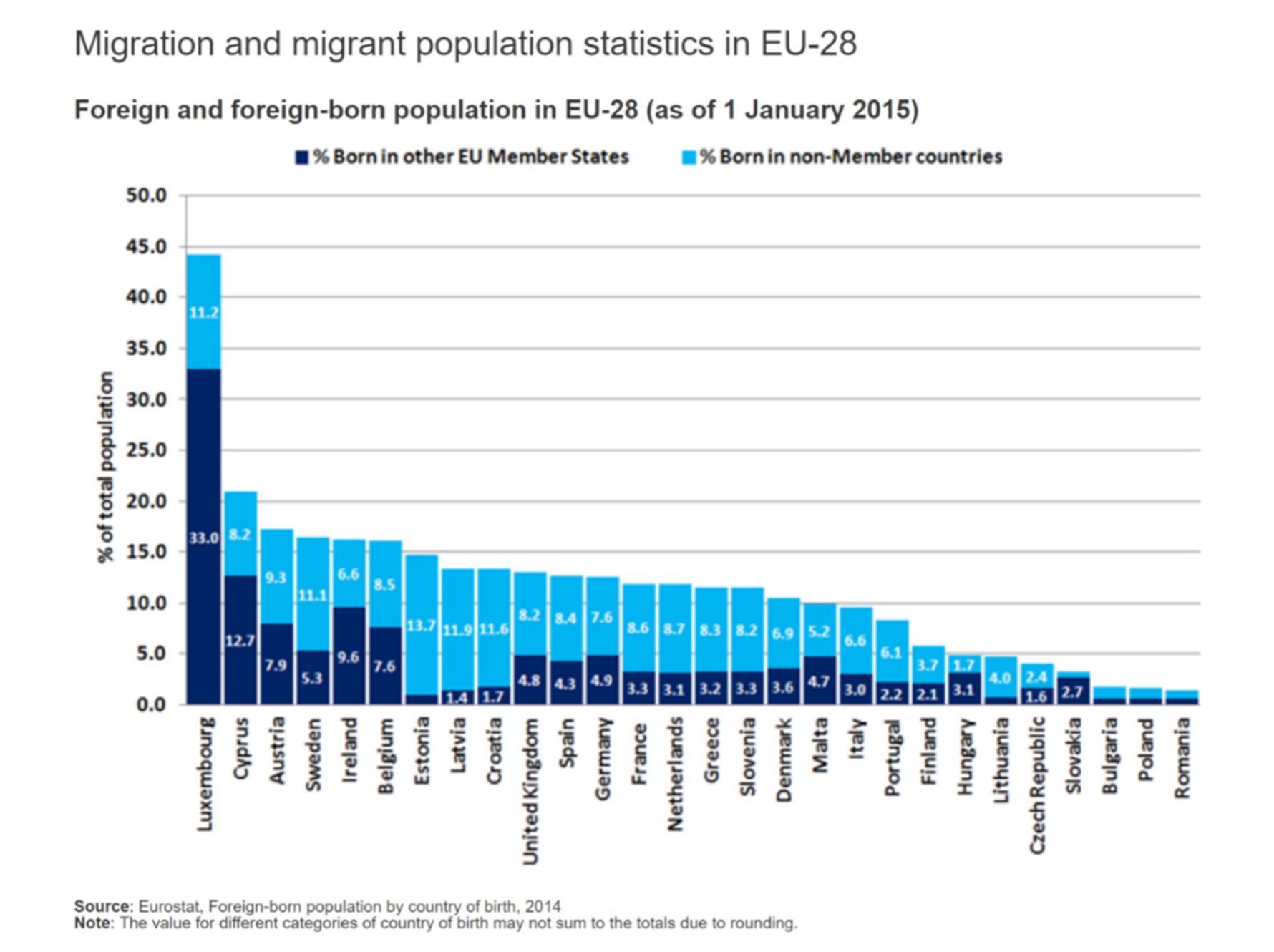