“The country is broken on a fundamental level, far more than it was even in 2008 with the disappearance of the so-called Celtic Tiger. The breaking of Ireland that has occurred is the breaking of more than the economy. The Tiger was a distraction in many ways – for the first time we had money that we didn’t have before, so we were distracted from the fundamental moral and social chaos that was entering into the very heart of the nation.” — Justin Barrett

The National Party is happy to announce that our Ceannaire, Justin Barrett will be running in the upcoming Dublin Bay South Bye-Election.

Justin Barrett founded the National Party in 2016. He is an experienced campaigner and has been involved in Eurosceptic and Pro-Life activism since the early 1990s. He was prominent in the 2001 ‘No to Nice’ campaign and ran for the European Parliament in 2004 on a platform of immigration control.

Through the hard work of our dedicated membership, the National Party has campaigned in opposition to Lockdown on the grounds of its disproportionate negative impact on the Irish Nation. We have campaigned for Irish people to be given preference in housing and welfare over foreign-nationals. We have highlighted the role of mass-immigration as a tool of International Finance Capitalism. We have campaigned for predatory foreign investment funds to be outlawed from buying up Irish housing stock. We have campaigned for an end to the Asylum Industry and for radical reform of Irish citizenship. 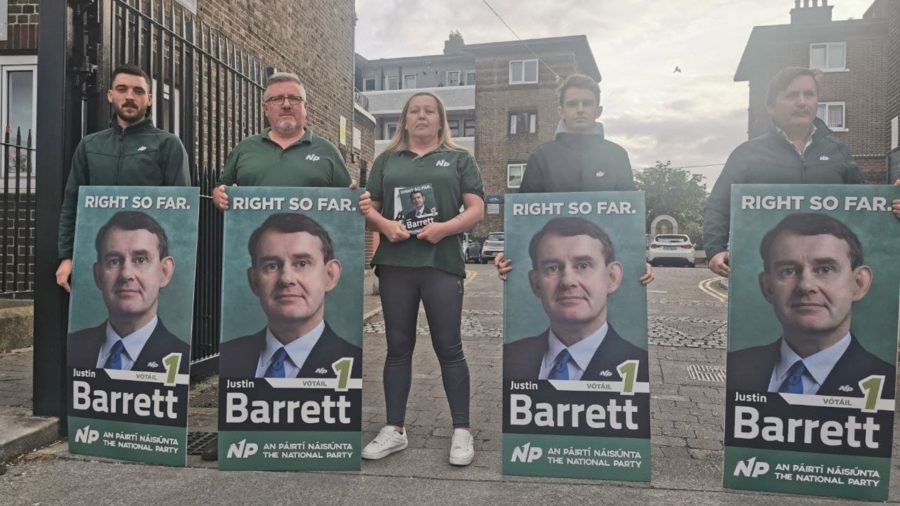 Since the erroneous declaration by our government of a pandemic necessitating the complete shut down of our country, the National Party have spoken out and have led many with the slogan, “Let Ireland Live!”

That slogan is more than a statement against lockdown or against the encroachment of Irish freedoms. It stands for a transformation of Irish society – offering nationalist solutions to the failures of globalism.

When we say Let Ireland Live, what do we mean?

Where we live – Ireland is the home of the Irish people. We hold it in trust for future generations. Both the national community and the natural environment in which we live, require our vigilance and protection. Demographic displacement of our people and broad ecological collapse threatens our place in the world.

How we live – Technology, money, power: these things are not ends in themselves. GDP targets, endless growth and consumerism cannot be the metric of human fulfilment. Our technologies, our economy, our way of life, must exist in service to the national project and the greater good.

Why we live – Social problems cannot just be bought off. We need to revive the national community, support and promote family formation, prioritise housing for Irish families, revive organic community, give life back its meaning, give people purpose.

What we live on – Create an economy of real production and real assets, not manufactured credit or manufactured debt. Place the right to issue currency in the hands of the Irish State on behalf of the Irish People.

Who we are – When we cease to see ourselves as a People we will lose our ability to unify and resist. When we lose the basis of our identity which is our collective sense of who we are, rooted in culture, history and blood, we will have surrendered Ireland.

We would like to call on our members and supporters to get involved as best they can in the coming weeks. There will be plenty of work to be done and plenty of ways to help. If you cannot assist on the ground personally, please donate to help cover the expenses of the campaign. We thank you in advance for your efforts.

Justin Barrett and the National Party will continue to strive to create an Ireland which in the words of Pádraig Mac Piarais, is “not free merely but Gaelic as well, not Gaelic merely but free as well.”