IRISHMEN AND IRISHWOMEN:
In the name of God and of the dead generations from which she receives her old tradition of nationhood, Ireland, through us, summons her children to her flag and strikes for her freedom.

It is clear now that the people who have done their utmost to make Ireland a more dangerous society, have decided on their alibi. That alibi is that Irish masculinity “done it” and furthermore that they caught the culprit red-handed! Their conclusion is perfectly consistent with an attitude that holds both the prosecution of dangerous criminals and the pursuit of rooted social values in contempt. Not only have they created an environment where women cannot safely walk the streets, they are using this dire situation to pathologise our whole society. What can result from this? Other than a country of traumatised Irish women and emasculated Irish men?

Theatre of the Absurd

Nothing sums up a society like the manner in which it responds to tragedy. Nothing sums up how hollow and artificial this New Ireland has become than how it launders its failures in the public space. The failure of the State and the NGO complex to create a society safe for Irish women, is refashioned in the media sphere as a gripping crusade to achieve just that. The NGO complex, which is by now a sort of secondary civil service, counterfeits anti-system outrage. This is really just a way of redirecting public grief away from the actual root causes. It resembles the Hollywood public relations coup by which the Los Angeles entertainment industry was allowed to repackage its own sordid sexual abuse scandal as the glitzy #MeToo movement. A scandal that could have brought down an industry was simply restructured into a franchise property of that industry. Theatricality is the most effective mode of damage control and the NGO sector in Ireland is no stranger to such theatrics.

But nobody in power in Ireland is taking responsibility for that. The interests which have shaped this country over the past three decades at least, are all playing dumb and pointing their fingers away from power. The society which they have created is treated as though it were in the hands of Martians, as if it were something totally alien and nothing to do with them. Yet they are hegemonic. This society is the result of ERSI type visions for economic transformation and INAR type visions for social transformation. It is an engineered society and the NGO sector are among its most prominent engineers.

Irish Women Are Not Safe

They tell us that Irish women are not safe in Ireland, but who is to blame? Not the NGO sector of course and not really the State. It is men who are to blame. Men in the abstract. Men in the collective. And by strong implication “Irish Men” since other categories of men have designated victimhood status. This is Hollywood theatrics at its best. This is damage control at its best. What is more, it has nothing to do with Ireland or with attacks on Irish women. It is as astroturfed as it is asinine. The same people will tell you the next day that all criminals are really victims.

It is hard to see anything that the current status quo will do or say that will make Irish society safer for women. Starting from where they are starting and thinking the way that they think, a deep solution is not really possible. They may put in place a vast infrastructure to protect women in public places, but the necessity of such is simply a confession that society is becoming more and more dangerous. And the actual effectiveness of the infrastructure will be totally undermined by their blindsided ideas of where the real dangers lie.

Our current social trajectory is, unfortunately, beyond scrutiny. None of these NGOs or talking heads gives airtime to the root causes for Ireland becoming more dangerous. Look around the world and see which societies are safe for women and which ones are not. The patterns are clear enough. If our State employees believe they are designing something safe, they are deluding themselves. If they think they can retrofit the botched job they have done, they are even more deluded. How do you make women safe in a society designed to be dangerous? You do so through administrative overkill, by immense technocratic intervention and by tokenistic gestures. We will eventually see suggestions like having separate rail carriages, that is one for both sexes and a separate carriage exclusively for women (and of course for men who identify as women). Feeling safe yet?

In the end it will make little difference. A society open to the world, is a society open to constant new threats. A society with a declining core identity is one in which social trust will inevitably decline also. A multicultural society is what is promoted in Ireland. It is promoted by the government and by NGOs and by the media. There is nothing about a multicultural society that guarantees it is safer than what came before. If anything one would expect it to be more dangerous. But since we can’t even talk about that how can it ever be addressed?

And let’s be clear, when we suggest that engineered multiculturalism leads to less cohesion and trust, it is not simply the people coming here to whom that applies. It is the overall society. It is the core culture, above all, which begins to show signs of disintegration and discontinuity. It is not a case of pointing always to “immigrant crimes” as such, it is an observation of the overall social fabric. You will have the usual stratification, the formation of parallels communities, but these will not always take the expected form. In some cases, minority groups (by their very stratification) will retain more cohesion and trust (at least amongst themselves) than exists in the society at large. As we see elsewhere, it is the more underprivileged members of the core culture (the poor and particularly those in intergenerational welfare) who are often the biggest losers in multiculturalism. So while foreign criminality is certainly a feature of our “global island” it is by no means the sole aspect of concern. 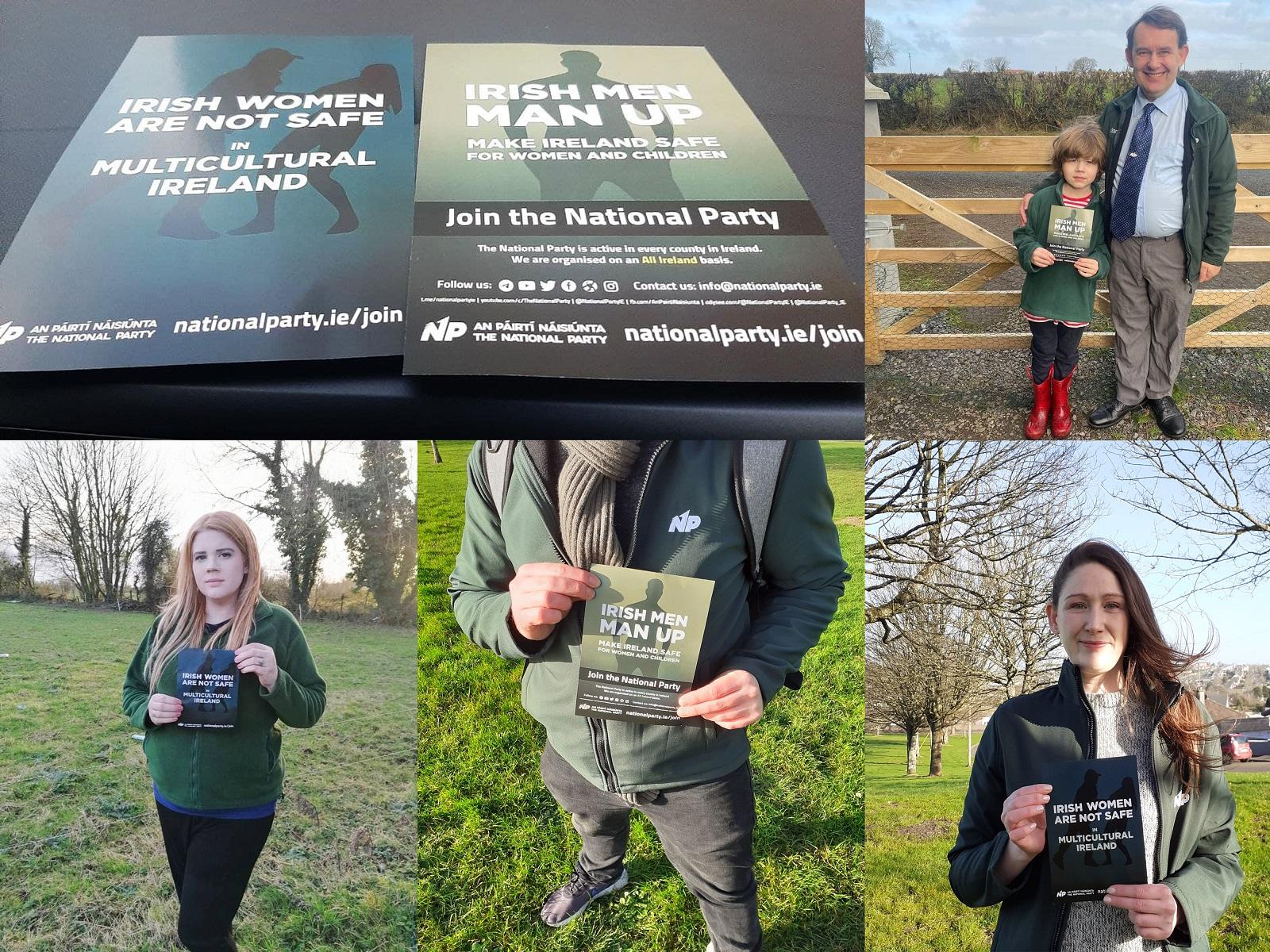 The NGO complex in Ireland is convinced of two things: that all men are bad and that all migrants are good. They cannot be right about both of these things. So which is it? If men are to blame why are we importing more men? It is clear that what they really believe is the Hollywood cliché that the core culture is to blame; a strong nation is to blame, Irish manhood is to blame. Imagine if the English had been this ingenious when they strove, century after century, to demolish Irish manhood. Imagine if the cruel murder of an Irish woman had been used by English propagandists to delegitimise Irish masculinity. Could such a thing even be believed?

This gaslighting of the Irish nation does not make Irish women safe of course. Quite the opposite in fact because it primarily targets the native male population, the best of whom should be doing the job of protecting Ireland. It actually places obstacles in the way of Irish men protecting Irish women because it designates Irish masculinity and male agency as a negative force. It gives privileged cultural and legal status to foreigners who as a result have no reason to respect Irish law or Irish culture. They have every reason on the other hand to view it as weak and unwilling to protect its own. And of course among the vast numbers of people whom Ireland has taken in, over the past twenty to thirty years, there will be among them people who are of low character and of incompatible values. It does not require “all immigrants” to be bastards, anymore than it requires “all men” to be bastards. Common sense should tell you all you need to know.

It has been said that vigils taking place recently have been hijacked and politicised by left-wing extremists. This is to be expected. These very groups are complicit in making Ireland ever more dangerous. They cannot even tackle the abuse scandals within their own ranks. This will only become ever more demented. If we look at how things “progress” in other countries, we have a window into the near future. Look at how the coverage of murders is treated in the United States. That is what we are in for. Not only an intense obsession with masculinity but with race. It is easy to envision in the coming years how the media coverage around the horrific recent murder will be politicised in completely the opposite direction. It will be refashioned again within the context of a “privileged white woman” receiving “disproportionate” media and social media attention on the grounds of her race. That is the future insanity we are in for. There will be radio documentaries about it. Women of colour will describe how alienating it all was. Students will write dissertations about it. If you think that is too distasteful to be real, you are simply naive. Foreign murders are already reported on in such a racialised manner.

An Open Society/ A Closed Debate

Everything churned out by the NGO complex is calculated to transform society for specific political interests. How it is framed is just a device. The sloganeering is purely cynical. The more emotive the better. The shallower the better. They sell us a liberated Ireland as they rush triumphantly into new dangers, new calamities and new colour revolutions. Liberation, in the first place, does not imply greater safety, so that in itself is not peculiar, even if it remains unexamined. But they promise liberation and safety, both at the same time, without reflecting deeply on either. Freedom is nothing if it is not dangerous. Liberty almost always involves greater risk. Where one has forged a positive idea of freedom, one must rely on the national characteristics of a people to make it civilised and livable.

The virtues of a society hinge on the sources of deep communal solidarity. A society modelled on “openness” as an inherent virtue, in one wired to be hazardous. It is a liberation that often leaves one destitute; exposed and shivering before the winds of history. The more atomised our society is, the less communitarian, the less rooted in organic human networks, the more perilous on a day-to-day basis. The more we travel alone through our lives without the support structures of family and organic community, the more vulnerable we will be to a whole host of horrors. Whatever inadequate security apparatus we build to compensate for this, will only reinforce our peril; formalising it and making it permanent.

If we are really interested in making society safer for Irish women (not to mention Irish men and Irish children) we should start by defunding and driving out the whole complex of nutcase NGOs who seek to weaponise sectionalist issues for the purposes to destabilising Irish society. Their State and EU funded hate campaigns against Irish people and against rooted forms of community and identity are a key aspect in making our country as dangerous and dislocated as it currently is. The alignment of economic and social interests that envision Ireland as a mercantile outpost of Anglo liberalism, flying the rainbow flag over a transient populous, are ultimately what has created a situation where ordinary women cannot walk down a secluded footpath without fear for their lives.