A primer on the economics of Irexit

Irexit as it has entered the public discourse is a captivatingly simple solution to an extraordinarily complicated problem. Through the mechanism of triggering the Article 50 provision of the Lisbon Treaty, itself a series of amendments to previous Treaties of the European Union, Ireland as a member state declares its intention to withdraw from that Union, and consequently assert its independence legally, socially, economically and otherwise. Within two years an agreement on the future relationship between what will become the non-member state Ireland and the Union is negotiated and sets the parameters thereafter. Of course, failure to reach such agreement doesn’t invalidate the triggered mechanism, and membership with all it entails merely lapses.

Its apparent simplicity is its main selling point. All problems, and there are many, which flow from Ireland’s membership of the EU disappear, and the negotiating process offers the enticing prospect of ridding ourselves of such problems and restraints while retaining all or most of the benefits, of which even the worst critic of the Union will admit there are some.

The idea of leaving the EU has been around I suppose since the day we entered, one way or another, though it has stayed to the furthest fringes of Irish political debate until recently. And the recent event which has given it new meaning and new life is the actual triggering of Article 50 by another member state, the United Kingdom, being sometimes referred to as just Britain and thence the term Brexit. The decision to Brexit has already been made by referendum of the electorate of that jurisdiction and the right to negotiate the terms by parliament of same. And Brexit has revealed too how complicated the thing might be in practice after 45 years of membership.

The complexities are many and they are political as well as legal and economic. In the immediate example the referendum passed 52% to 48% which is an astonishingly small margin for the magnitude of the change being sought by what are referred to in the media as the extreme Brexiteers, but who are increasingly looking like the only realistic Brexiteers. Since the Union was fundamentally hostile to the idea they were never going to make the process as simple as the term suggests.

A scenario of a lapse of membership rather than “a deal” was always a possibility, and as the clock ticks down with very little by way of settlement now seems probable. Nearly half the population doesn’t want it at all in any form, a rather basic read of the referendum result, but no more basic than to state that a little more than half want it wholeheartedly. The vote was binary and so is the result. The Parliament that approved the negotiations being multifariously divided on the desired outcome, not at all binary, there seems no majority there for any outcome. And the political establishment, including the Prime Minister and the main opposition leader campaigned against the result. And you haven’t left the jurisdiction of the UK yet. Scotland voted Remain as did the six county area of our own island.

From the Continent there is only intransigence. Brexit will come apart under the pressure of its own internal contradictions if only there are no viable external alternatives. Primary among the arguments put forward for Brexit were two contradictory statements, that since the Union members have a balance of trade surplus with the UK they would want to make a good deal to maintain that beneficial trade, and that the Union elites were engaged in a conscious political experiment with little regard for the best interests of the member states individually or even collectively. The latter, which is mostly true, is why the EU is quite prepared to pay a significant economic cost to its members so long as there is considerable damage to Britain too, and the Federal Project supersedes shorter term considerations.

I don’t know the long term consequences for Britain of a “no deal” exit. I don’t know the long term consequences for the EU. I do know the former is the fifth largest economy in the world by itself and is of itself a large internal market, not to mention its bargaining power around the world is extensive. A sudden reversion to WTO rules could be traumatic in the short term for both. The European Union is the largest internal market of any in the world. These are facts. To a certain extent it would be disingenuous to pretend to care that much as such, except as an exercise in intellectual speculation and, yes, it is quite possible to believe that Jacob Rees Mogg would be the best Prime Minister Britain could have for Britain, while understanding that for Ireland it would be somewhere on the spectrum from negative to disastrous. National interests are best served by nationalist leaders, that statement neither negates nor necessitates that a nationalist government in another country is to our benefit. And in the end Ireland’s benefit is the imperative both as an opinion and the National Party as policy. 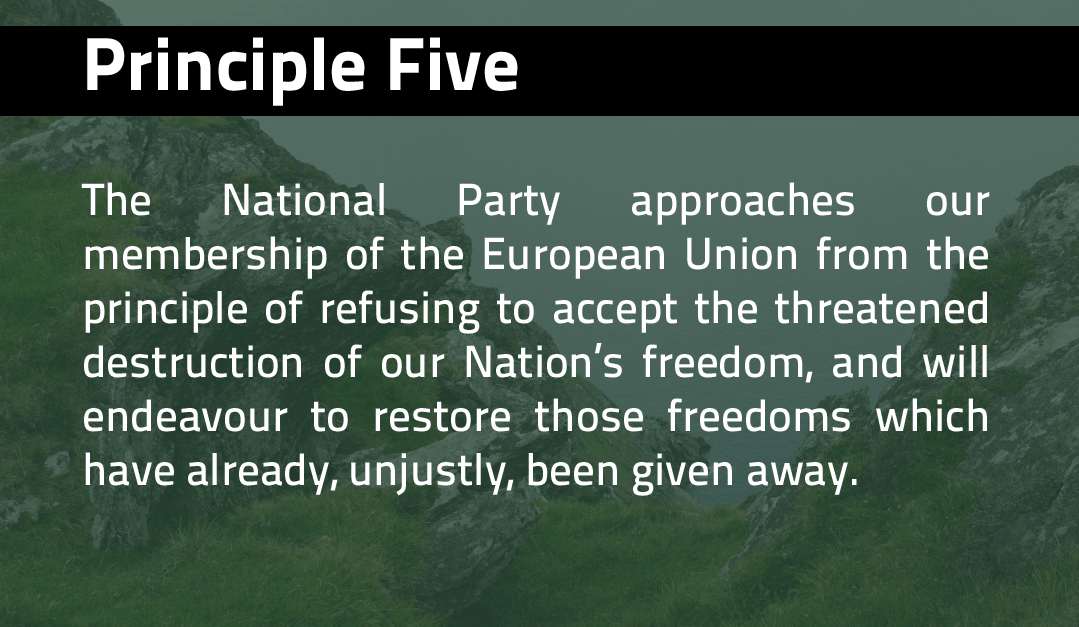 And of this we can be certain, that a “no deal” Brexit would and now looks increasingly like it will be a cataclysm for Ireland. There is a limit to which Britain cares and that is fair enough, but there is a mindless faith in the ruling regime in this country that the EU elites care about us very much, there is no single piece of evidence to support this opinion, and the regime have bet our future on this chimera.

Two years ago they could have exercised the sovereign option of steering a middle course, and pro-actively pursued a policy of intermediary between the UK and the EU, to attempt at least to steer the negotiations towards a favourable outcome for Ireland. In the most extreme instance they could have begun direct negotiations with Britain on a bilateral agreement between the two countries and insisted that agreement be accepted as legally binding in European law regardless of the outcome of other Brexit related matters. The avoidance of a hard border with the North surely topping the list, and the maintenance of free trade, if not customs union and single market, between the two islands. The methodology by which such a bilateral arrangement could have been fitted into an overarching settlement has its complications but back then we also had time. Now we have nothing but a claim by Jean Claude Juncker in the Dáil that Ireland would be protected in some unspecific way and that he was not drunk. And no sensible person believes either.

So Irexit then, it’s obvious. We trigger Article 50 of the Lisbon Treaty ourselves, leave the EU within two years on the now given assumption that there will be no deal for us either, negotiate a bilateral trade agreement with Britain, jaunt around the world negotiating separate trade agreements with whomever. No hard border with the six counties, and numerous other achievements including “taking back our borders”. Independence and freedom. In two years. No bother.

Let’s backtrack a moment. If a “no deal” Brexit is a cataclysm from which there now seems little hope of escaping there is the matter of why? The North is certainly an issue, the so-called backstop agreement was never worth the paper it was written on outside a general agreement, and the very real prospect of collapse to the already shaky “peace process” is amplified by the prospect of a hard border. But it isn’t solved by the absence of said hard border, which remains nonetheless a border, and all the other problems in resuscitating that process remain. It is not at all clear however in what scenario vis-à-vis Britain or the EU that such problems can be resolved.

The cataclysm which we are currently and certainly hurtling towards is primarily economic. Ireland has a small domestic market, and as such has always been dependent to a greater or lesser extent on foreign trade, commodity agriculture, and exports relying heavily on imported raw materials and foreign direct investment. It could not have been otherwise and attempts in the past were disastrous. There’s room to manoeuvre concerning diversification of dependency certainly but trade is where the game will be or there’s no game at all. Now consider the fact that over 17% of that trade is currently with the UK within a single market context, and “no deal” means reverting to WTO rules. No economy in the world is run on WTO rules and for good reason.

Certainly Irexit allows us to avoid this outcome by signing a bilateral agreement with the UK outside EU control, the detail of which could be literally worked out in a long weekend by keeping existing trade terms in a new agreement. But for that we would have to trigger Article 50 and there’s a two year gap before we formally leave the EU in which we can negotiate but not sign or implement anything. What happens to that 17% in the two years? And if the EU has cornered the fifth largest economy in the world into a no deal exit, it’s no leap to assume that after the two years it’s no deal for us either. But we conduct nearly 39% of our trade with EU member states. So the 17 gets hammered next April, and the 39 in two years’ time? Or we wait and trigger Article 50 later, so the 17 disappears altogether and the 39 gets hammered at some later date and we try to revive our trade with the UK from scratch two years after that?

None of this takes account of the level to which the 39% travels through Britain to reach the Continent and the extent to which alternative supply routes could begin operation immediately, or why that would even be done since we intend to cut off the 39% anyway as soon as possible. There’s the rest of the world surely? Individual trade agreements we can make now that we’re “independent”. Well not if we expect to keep a single market with the UK, we’ll have to trade with third parties on the UK’s terms just as we have to trade with them now under the EU’s terms. Or are we to be truly independent and begin negotiating trade deals from the starting point, forsaking 66% of our overall current trade in a swap for something better sometime, maybe. There’s the US to consider, with whom we do roughly 18% of our trade – how much of that is based on assumed access to the UK market and how much on access to the EU market, not to mention that a great deal of foreign direct investment is definitely from the US and predicated on access to both these other markets, not just one and certainly not neither.

All these figures are necessarily over simplified since we cannot know exactly the answers to any of the questions posed, nor is trade static anyway. But the amounts are so enormous that those figures can be egregiously wrong and the substance of the calamity is still there. One could easily use the term “doomed” and not in the slightest be engaged in hyperbole. Nor is there any way out because at least one scenario a “No Deal” Brexit is practically locked in, and in the two years we had to prepare we pretended it wouldn’t happen, and for all intents and purposes did nothing to prepare for it, insofar as it could have been done in that time frame.

In 45 years membership of the EEC through its various permutations Ireland has re-orientated its economy almost completely towards the EU to almost the same extent as we were previously engaged to the British market. But we had 45 years to do it, and no economic conflict with the UK as that turn-around occurred.

Only Irexit could make it worse…