In recent months, we have witnessed a string of very disappointing and frankly disgraceful incidents concerning the implementation of draconian Covid-19 restrictions. This time, the targets of the Government’s enforcement program, as well as the harassment of a certain councillor in Limerick and her political tag-alongs, were the parishioners of several Catholic churches throughout the country.

Videos have circulated widely online of such incidents. Sadly, there hasn’t been much sympathy outside our own political circles in Ireland and elsewhere. It is unlikely, in light of the publicisation of similar enforcement operations in other countries where religion has been the target, that this will have any effect on the changing of the laws that resulted in members of the Gardaí having the embarrassment and misfortune of being obliged to explain the “three E’s” to a bewildered Priest and his likewise bewildered parishioners on the day of one such “incident”. It pains me to even use the word “incident”. Even in modern, liberal Ireland, a small handful of people going to Mass on a Sunday morning was never considered an “incident” until it became a crime in March of last year.

The last time the Irish Nation witnessed such restrictions on religious practice were, of course, the penal times. Everyone in this country, perhaps with the exception of those residing in a cosmopolitan bubble, is well aware of our ancestors’ necessary practice of dutifully marching with their families into the woods at 4 o’ clock in the morning to hear Mass. Sometimes it was cold, sometimes they didn’t have shoes, sometimes they were caught and sometimes they were killed. The risk was worse than just a fine, but they went anyway. It isn’t something that liberal Ireland wants us to remember but it is something that liberal Ireland would like to repeat. Anyone with a conscience can clearly see how repugnant such a curb on the practice of religion is in light of the past of our country. In this sense, it ought naturally to resonate in the Irish mind in a way in which it does not resonate in the minds of other peoples. It may resonate in the American mind because it contradicts their constitutional doctrines, but the resonance it tends to have in the Irish mind is very different – it is much deeper and cannot exactly be expressed here.

The Irish perspective is one of unity with the past, to safeguard the present, in anticipation of the future. This necessitates a spirit of collective trial which is, by its nature, ancestral. This is not the first time in which we have found ourselves fighting the same battles that were fought in the past. Our frequent reference to the dead heroes of Irish Nationhood is not in a spirit of mere patriotism, but rather to acknowledge the unity of generational struggle that exists in our souls. This particular struggle pains us most grievously, and we regard the insult that the current ban on public religious practice represents to us with the same disgust and horror that our ancestors did.

The National Party stands for more than just change; it stands for transformation. To change is to have an effect. It can be an external effect or a change only in appearance. To transform is to effect an interior change or a change which has substance and meaning. The National Party has always striven to give people an ideal to follow and to orient them meaningfully towards the future. Naturally, therefore, to see the greatest instrument of such transformation being attacked as it was on Sunday greatly upsets us. We have always advocated for the highest respect to be afforded to members of An Garda Síochána, preferring instead to direct our ire towards the abominable Government that has made it the duty of the same Gardaí to enforce such ridiculous laws.

We absolutely make it our business to take a stand against disproportionate laws and restrictions that limit the ability of the Irish people to conduct their existences in a normal and, especially, in a sacred way. The ability to go to work, the ability to travel within the State, to open your business and to attend the Mass are all normal, and —in the latter case —sacred. There is no justification in the current circumstances for exercising such limits on these and other everyday activities. The National Party strongly condemns the interference of the State in the affairs of the Church, and we will continue to work on behalf of the Irish people and Nation for the relieving of these absurd regulations. 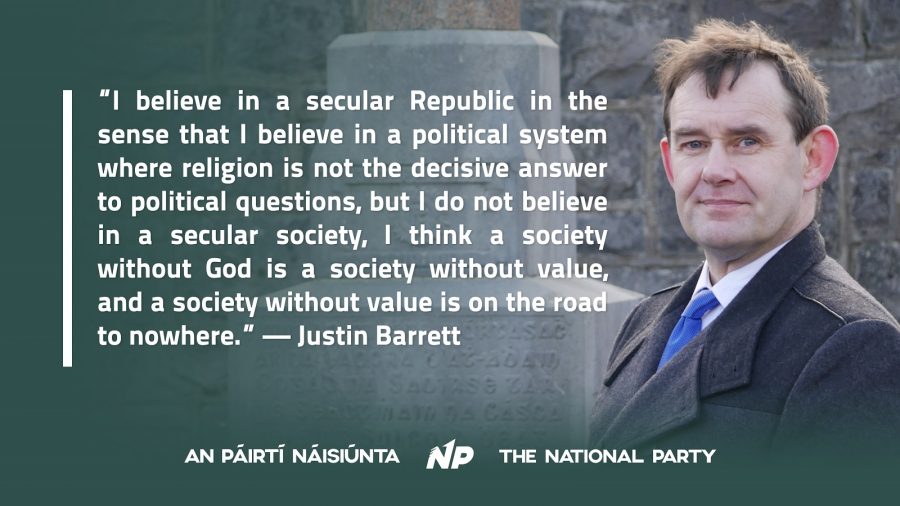