Breaking the spell of defeatism is the role of activism. The overwhelming attitude that afflicts our people, is the debilitating cancer of nihilism and hopelessness. All around us, everyday we witness the decay. We witness the destruction of our culture, our countries. We watch with disgust the spreading degeneracy peddled everywhere, in the media, in our schools. Yet the majority appear stricken with a crippling inertia and a mantra — “what can you do about it?”

This, of course, is to be expected because it is a deliberate strategy of the system. Those who hold the strings of power spread this sense of powerlessness to maintain their tenuous grip over us. The most terrifying nightmare for the rulers and their minions in establishment politics and media is that a significant number of people will realise that they have the ability to end this through collective action.

The easy option of course is to just accept the negativity and give in to the despair that “things have gone too far”. However, as a colleague said recently, what is done can be undone. We are at the beginning of a momentous historical epoch. The enemies of our people have revealed themselves. They are pushing too hard, too soon. Their momentum is waning as they grow more and more desperate, while our momentum is accelerating. The role of the Nationalist is to show leadership and an unwavering resolve and to remain resolute in a sea of confusion. Our role is to raise hope and give people direction. Our duty is to provide a vehicle within which the many can join and participate in the resurrection of the Nation. With each attack upon our culture, upon our children, upon our very existence, we grow stronger. It can be no other way.

While the whole of Western Europe is being deliberately colonised and our homelands destroyed, there is a growing awareness that this is happening and that we need to stop it. In France recently a poll showed that close to 70% of the population believed that the Great Replacement is presently taking place. Many people across the island of Ireland believe the same but only speak about it in hushed tones for fear of being attacked. We all see it on our streets, on our television screens and in the relentless advertising campaigns that are aimed at demoralising the indigenous population and destroying our ancient culture. This is the reason why so many laws are made to prevent people from even discussing it. It is why the puppets in Leinster House and their lapdogs in the media scramble repeatedly for the catchphrases “racist” and “white supremacists” to try to prevent the rising tide of awareness. They do so to intimidate and force people to retreat. They are panicking and trying to keep a lid on things. Those in power fear people organising for a collective goal. Despite their control over the money system, over the political system and over the mass media; despite endless indoctrination through the education system, increasing numbers are seeing through their lies. They know it, we know it, they know that we know it and so they will try every dirty trick in the book to hold back this tide.

Where does this “re-conquest” of our homeland start? We have already started the fight back. On a personal level we have recognised the huge problems we face. We have started the discussion with our family, our friends, perhaps with neighbours. But to really achieve our aims we must become organised into a collective, cohesive group. We must reach out to and become involved with like-minded people. The only organisation in Ireland, in my humble opinion, capable of successfully taking on the gigantic task of reclaiming our homeland, is The National Party. 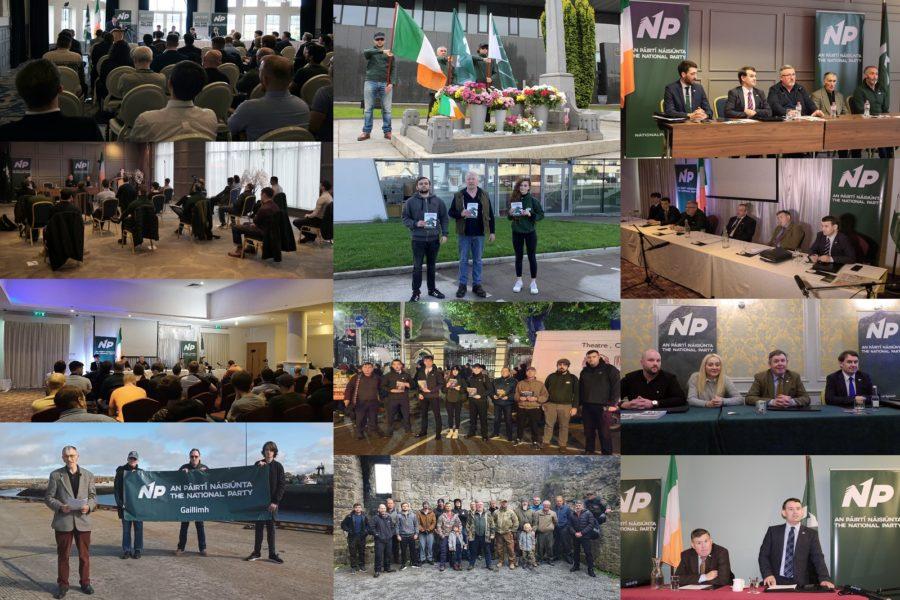 The leftist/liberal system thrives on destroying unity and spreading isolation and individualism. The way we win is by joining together. We join together with like-minded people, people who share a cultural and genetic history, people who hunger to save their homelands and rebuild them to heights of glory. We use our skills, whether on the internet, organising meetings, postering, training, educating, all in the pursuit of the goal, National Sovereignty. Collectively, in a cohesive unit, we can build strong communities, develop the struggle and achieve our aims. The same aims that our ancestors struggled for.

Make no mistake, we stand at one of the most pivotal moments in our history. We cannot sit watching from the sidelines and hope that it goes away. We cannot sit back and wait for someone else to do it. There will be no one coming to save us. The destruction of our society is not going to go away by ignoring it. The answer to “what can I do?” is very simple — by joining with others you can change the course of history. You have a duty to join with others and to work tirelessly to reclaim your country, to safeguard a future not just for you but for your children and the unborn generations.

Our future, our survival as a people, is in our hands. We cannot run away from it. If you are reading this, then you know deep down that this is on you, your people need you, this is your destiny. The time of trying to hide is over, the time of playing it safe and not putting your head above the parapet is over. The future awaits.

Join the National Party. Play the role you were born for. Play your part. Towards an Irish Dawn.