It isn’t difficult to find yourself estranged in the modern world. While every generation seems to be nostalgic for the decade that they grew up in, there is something fundamentally different about the feeling experienced by many people in current times. Even the youngest among us have an impression that the world of just 10 to 15 years ago is not the one that they are living in now. There is a surreal sense of discontinuity between the start of the new millennium and the present day. Some have been led to believe that we are living in a sort of pre-apocalypse, perhaps the Mayans had correctly prophesied the year 2012 as the beginning of the end? Although it could be argued that humanity is doing a convincing rendition of the Book of Revelation, there are somewhat less pessimistic and more realistic explanations. What we’re seeing of course is the destruction of the “old Ireland”, the memories of the past are to be forgotten, and any that are retained are to be treated with absolute disdain. Irish history will be reduced to a cruel simulacrum of drunkards battering women and clergy abusing children. This is being done in the name of globalism, because globalism isn’t simply a theory of economic interdependence between countries; it is the idea that everybody on the planet is or ought to be completely indistinguishable from one another, that we are merely individuals with no ties to the concepts of family, community and nation; that we exist solely to benefit the industrial and financial systems, and that we are all equally replaceable.

Globalism can’t be traced back to a single institution, it’s an omnipresent phenomenon, no matter where it goes it feels at home. Despite this, certain points of origin and areas of operation can be identified. On our side of the Atlantic, we can find the deeply interconnected hubs of London, Brussels and Frankfurt to name some of the major few. They are not only interconnected on a European scale, they also operate transcontinentally with other regional hubs. Across the pond we can also find some of the world’s biggest forums for finance capital. New York is at the centre of the world’s largest economy, the United States of America. It has such an enormous influence that the term “Wall Street” alone is internationally recognised as a colloquialism for the global markets. Washington is home to most political apparatuses of the United States Government, including the world’s largest military. Not to be forgotten is the city of Los Angeles. Often outshone by the larger financial centre of Chicago which has its own stock exchange, Los Angeles is unique because it’s where you can find Hollywood, the epicentre of video production in the United States. A single 30-mile circle around Los Angeles is the playground for multiple Fortune 500 companies and is responsible for America’s largest cultural export. Looking into the lens of a camera may be more comforting than looking down the barrel of an M4 rifle, but it can be said quite confidently that more damage has been done to Ireland through the derision of social norms and boundaries by purposely obscene television and cinema than by an unarmed C-17 using Shannon Airport as a service station.

As with many other sectors that have been taken over by Marxist and neoliberal theoreticians, the role of the entertainment industry is no longer to entertain. Now, the priorities of these industries are to “further racial equity” and “promote diversity and inclusion”, enjoyment and value for money are secondary. Production companies will set quotas for all types of minorities and celebrate their implementation, then at the awards ceremony they will shed crocodile tears about how there isn’t enough being done before starting the ritualistic cycle all over again. Having a rich socialite condescendingly scorn you from a gated community about your privilege is — unsurprisingly — unappealing to the masses. For this reason the majority of the Academy Awards viewership has stopped watching, and not just people who are politically right-leaning. Hollywood’s attempt to be publicly aligned with the progressive left has been mostly denounced. Unfortunately the broader American influence that they’ve left on our own domestic politics hasn’t been met with the same resistance.

The left-wing in Ireland tend to inherit their lexicon from their stateside counterparts, they’re truly internationalist in that regard. If you have the patience to read a Sinn Féin manifesto, you will notice that Fine Gael and Fianna Fáil are persistently referred to as “right-wing” or “conservative” parties. It is a fallacy predicated on the fact that both Fine Gael and Fianna Fáil are free-market capitalist parties. As flawed as contemporary political theory and analysis may be, it is widely accepted that free-market capitalism is rooted in liberal ideology. If holding individualistic beliefs on social and cultural issues is considered liberal yet holding individualistic beliefs on economic issues is considered conservative, there is a clear logical contradiction. It only becomes understandable if you interpret the material from an American perspective, where economic liberalism is referred to as “fiscal conservatism” due to its association with American conservatives. Free-market idolatry among European conservatives can only be found in the post-WWII era. Germany was the first recipient of such thinking during the American occupation from 1945-49.

While the aforementioned example is quite formal and philosophical, there are more informal examples of this American influence. A while ago I was introduced to a new term, BIPOC (Black, Indigenous, and People of Colour). I was originally under the impression that it was satirical. I was familiar with the term POC (People of Colour) and I thought that adding redundant letters to the beginning was some form of meme in the same way I’ve jokingly seen the LGBT acronym be expanded to comically large strings of letters. Shortly after discovering this new term, I was surprised to see members of the Irish left adopting it. BIPOC might make sense in the United States, where “Indigenous” refers to the collective Native American ethnicities that inhabited America prior to the European settlers, but what does it mean in the context of Ireland? Unless you believe in the bizarre theory of the Twa people being exterminated by Saint Patrick, it is abundantly clear who the indigenous people of Ireland are. Now that we’re included in this group of oppressed peoples, can we have our own pride/history month? Maybe they’ll have global protests that violate health restrictions when Irish people are negligently killed by police in equally negligible numbers?

Seeing Through the Fog

You can sometimes get a chuckle out of this material, but it isn’t so funny when only one side thinks it’s a joke. There is a genuine sentiment held by the Irish left that it is the right-wing that is in control in Ireland. If the right-wing in Ireland are now in favour of on-demand abortion, gay marriage, transgender hormones for children, etc. then who exactly are the “far-right”? The Overton Window has been shifted so far to the left that anybody who continues to hold an opinion that was socially acceptable 10 years ago is put in the same category as Reinhard Heydrich and Vidkun Quisling. Of course, such a rapid shift wouldn’t be possible without the assistance of the state and the financial conglomerates. Progressive activism has more corporate sponsors than most sports teams, it is especially evident now in June more so than any other time of year that international finance capital is fully dedicated to the advancement of left-wing causes. The go-to rebuttal to these sorts of claims is that the companies aren’t acting sincerely. In the wake of George Floyd’s death, private banks pledged billions to black causes even before the riots had really begun, they acted before the activist crowd had put one foot out the door. When an airline takes a flight crew off-duty to parade them down O’Connell Street in rainbow uniform, is it supposed to be ironic? Are we being punked?

The arguments don’t make sense, the excuses don’t excuse anything, they weren’t meant to anyway. You were never meant to be convinced, you were ordered to support it, and they’ll make sure you will. The modern leftist is the prototype for the globalist “good citizen”, a public relations officer with the expendability of a shock troop. In exchange for their support in pushing the Hegelian synthesis, they receive a feeling of being moral and altruistic, the type of feeling you get when you drop a €2 coin in the donation basket at Mass. It may seem like a banal lifestyle, but social credit is the only thing you have when you’re supposed to own nothing and be happy. We’re not the only people who’ve noticed this, in the modern age it’s been noticed by anti-ideologues like Jordan Peterson, but also earlier on by the ideological environmentalists of the 1970s. There are rarely any green parties without socialist elements, it turns out the watermelon analogy is well-rooted in reality. The old guard distanced themselves from the leftist entryists when they realised the newbies were more interested in growing colourful flora for their anti-racist communal garden. There was no need for the old guard anymore, the new guard have proved much better, they are steadfast in their devotion towards posing no threat to the regime whatsoever. 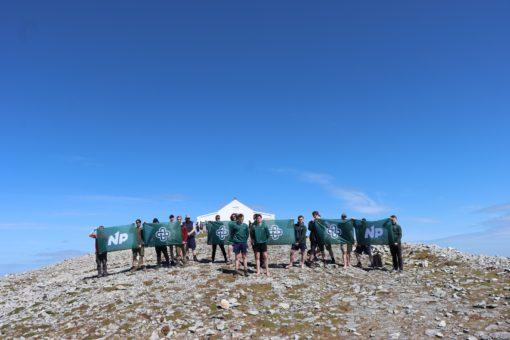 Over the years, I’ve gone on numerous outings with members of the National Party. Regional and national meetings, leaflet drops, hikes; the people I’ve met are entirely committed to the national cause. They do what they do because of our duty as Irish men and women and out of love for our country, there is no selfish motive. Most of them will remain unnamed in spite of the great patriotic work they do, and I am honoured to stand alongside them as friends and colleagues in the battle for Ireland.