Among the strangest spectacles in Europe today is the sight of Ireland, a country whose ‘defence forces’ are in tatters, and whose military capacity is negligible, stand out as among the most hawkish voices in the Russian-Ukrainian conflict. That title itself is of course inadequate. All we know for sure is that war is being made on Europe and that blood for the sake of that war is being spilt in Ukraine.

We should say of course “Ireland’s political theatre” and not Ireland, but the effect is the same. The carnage of war does not discriminate. What Micheál Martin or Leo Varadkar say is said on behalf of the Irish people whether we agree with the sentiments or not. It is we who will face the consequences. On each of our backs there is a target now. However one characterises this conflict, we are all implicated.

As we face into a winter of great uncertainty, a time of rapid inflation, fuel poverty and general insecurity, our leaders playact as war hawks, making grandiose ultimatums on the world stage and sending millions in borrowed money as military aid to an army many times the size of Ireland’s. ‘In for a penny, in for a pound’, that’s the saying that comes to mind. What started in the 1960s with Foreign Direct Investment, opening up the country, etc., is now working its way towards front seats in a new world war.

Modern people think little of casting off rooted nationality for a glimmer of prosperity, but the debt incurred remembers what we forget. The time comes to accept the bill. To the British Empire, Ireland was a resource of labour, soldiery and agricultural produce, jealously guarded and ruthlessly exploited. To the modern empire, Ireland is a base for multinational money laundering and liberal social engineering. Our leaders are spokespeople for the vassal European Union and the East Coast American establishment, or more accurately for a mercantile interest whose war on Europe is as old as Ireland’s fight for national liberation.

Roger Casement and the “Anti-European” Power

One cannot help but think of Roger Casement’s writings on the eve of the First World War, in which he perceived the British Empire as a force, not simply at war with Germany but with Old Europe, to which the only solution as he saw it was that Europe must break the stranglehold of British naval monopoly. This object for Casement could only be achieved by taking the strategic island of Ireland out of British control. The British Empire was the anti-European power. It followed that the salvation of Europe lay in breaking that power and that the salvation of Ireland lay in taking her natural place as a European nation.

An Ireland strong, independent and self-contained, a member of the European family of nations, restored to her kindred, would be the surest guarantee for the healthy development of European interests in those regions whence they are to-day excluded by the anti-European policy of England.

‘Detach Ireland from the map of the British Empire and restore it to the map of Europe and that day England resumes her native proportions and Europe assumes its rightful stature in the empire of the world. 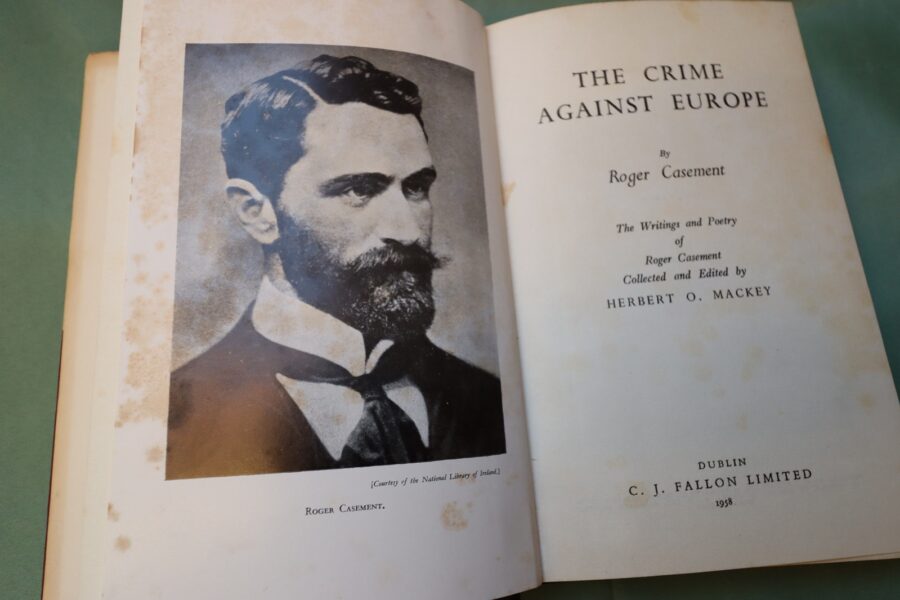 The fall of Europe (and Ireland as a European nation) is guaranteed in large part by the fog that lies over our history. And the lack of emphasis we place in memory on the vital moments of contest and decline. As Irish people and as Europeans we live in a dream of soundbites and misinformation, disconnected from historical causality or rooted national consciousness.

The fate of Europe (and of the world) has lain often with the forlorn hopes of obscure contests. Some of those contests have even been fought in Ireland. They have been fought on perhaps every continent, perhaps on every ocean, perhaps not always with a clear hero on one side or villain on the other. But beneath these contests of imperfect motives and imprecise actors, flowed the subterranean currents of an eternal conflict. The conflict between the rooted and the cosmopolitan, between order and disorder, natural and unnatural, spiritual and mercantile. If we care to examine our own times, we will find ourselves upon one or the other side of this ancient contest.

It has been said that the defeat of the Confederate States in the American war of 1861 to 1865 was the last stand in the ‘new world’ of an aristocratic agrarian civilisation, and that it birthed the modern, avaricious American Empire; the partners and eventual heirs to the money powers of London. Indeed John Mitchel, who along with Thomas Davis was the greatest of the Young Irelanders, saw it at the time in just such terms. The Yankee North he associated with ‘the commercial, manufacturing, and money-broking power’, the Antebellum South he saw as an agrarian, patrician civilisation akin to the classical republics in Greece and Rome. These two civilisational instincts were at violent odds with one another. In the following century, American-based finance would decisively intervene (against the will of America’s own European inhabitants) on the side of the aforementioned mercantile interests to crush the continental European powers in two world wars, destroying much of what was left of European tradition, rootedness and vitality.

In similar respects, the defeat of the Gaelic princes in the Nine Years’ War, the last stand perhaps in Western Europe of an ancient still independent pre-feudal nobility, was a defeat both for Christendom (which the O’Neill’s and O’Donnells defended) and for European civilisation as a whole, because it consolidated the mercantile grip of piratical England that grew (like Wilfred Scotts’s Anaconda Plan) to strangle the continental powers of Spain, France, Russia and Germany. In the writings of Roger Casement this point is emphasised again and again, that Gaelic Ireland subdued and isolated made England safe and made the empire possible. Had Philip II or III of Spain sent a really significant force to his Catholic allies in Ireland, or later Louis XIV of France, the sea power of Britain could have been broken, and the fortunes of those two powers changed.

Louis XIV, came nearest, perhaps, of European rulers to realising its importance in the conflict of European interests when he sought to establish James II on its throne as rival to the monarch of Great Britain and counterpoise to the British sovereignty in the western seas… Napoleon, too late, in St. Helena, realised his error: “Had I gone to Ireland instead of to Egypt the Empire of England was at an end.”

Writing on the eve of the First World War, Casement also saw the danger of the United States entering the war on the side of England. ‘Were the “Anglo-Saxon Alliance” ever consummated it would be the biggest crime in human history. That alliance is meant by the chief party seeking it to be a perpetual threat to the peoples of Europe, nay, to the whole of mankind outside the allied ranks. And instead of bringing peace it must assuredly bring the most distracting and disastrous conflict that has ever stained the world with blood.’ And so it came to be.

The evil genius of Tudor England seeing its ambitions frustrated on the continent, birthed what eventually became the British Empire — the anti-European power — consolidated in the meantime by Oliver Cromwell and William of Orange. Behind the blanket of naval supremacy, was insulated the parasitical outgrowths of Finance, Bolshevism, Zionism and Liberalism. Finally out-competed by a unified industrious Germany, London aligned itself in unholy consort with East Coast American money partners, to impose a humiliating peace upon a broken, emasculated Europe, a process ongoing to this day, dragging with it the corpse of what was once England. The fate of the O’Neill’s and the O’Donnell’s, later the fate of the Southern Confederates under “reconstruction” was eventually the fate of Old Europe as a whole. And here we are.

The Sabotage of Nord Stream and of Irish Neutrality

We find ourselves today taking sides (or being thrown about) in a conflict which can only obliterate us. Between the Zelensky regime which represents the East Coast money powers rather than the Ukranian people, and Putin’s Russia which is locked in a struggle of frightening stakes, there is no foothold for Ireland to feel a path to safety. The so-called powers of Europe are, as it stands in the cold light of October 2022, little more than pawns.

One of the immediate threats to Ireland comes from the abandonment of military neutrality, a course which is now heavily promoted in the media. Minister of State for European Affairs, Thomas Byrne said recently that: ‘In Ireland we probably need a new conception of what defence is, a new concept.’ This comment was made in relation to cables carrying transatlantic internet traffic, now seen as vulnerable in light of the Nord Stream pipeline explosions ‘for which Western governments have blamed sabotage.’ But who are we defending ourselves from exactly? The mysterious people who blew up Nord Stream?

What we must always keep in mind is that NATO is not Europe, anymore than the European Union is Europe. They are vassals of the same anti-European power. Closer military partnership can only exacerbate the dangers we already face. We see already an increased emphasis in Irish military affairs on monitoring the Irish people. Indeed, most western countries now seem to view large sections of their native populations as semi-hostile elements. Being at war with one’s own people is for sure a ‘new concept of defence’.

Is the destruction of the Nord Stream pipelines another ‘crime against Europe’ as Casement might put it? And a crime committed by the same actors? Whoever carried it out, the result is the further subordination of Europe, especially Germany, to the gameplan of Washington. It is notable that the only people who cheered were the war hawks across the Atlantic.

Questions Going Forward – What Is Our Role in the Battle for Europe?

But is the answer Casement gave then still relevant today? Is Ireland’s strategic importance to an independent Europe as vital now as Casement saw it then? These are questions without answers.

The cloud of confusion is such that the Irish, akin to most other European peoples, see only what the media spin. The currents of an ancient conflict flow onward, from the past into the future, but we are in no position to come to anyone’s rescue. It is enough to identify the currents in our society and to make a stand on our own terms in our own way. To fight for Ireland is to fight for Europe. To fight for our nationality is to fight against the anti-European power. That is enough for now. We are neither in a position to call for aid or to give it. Allegiances can only come when we stand on our own two feet. The peoples of Europe must clarify for themselves before Europe clarifies. People must recognise that there is a crime against Europe in the first place before they can legitimately take sides in what is to come. 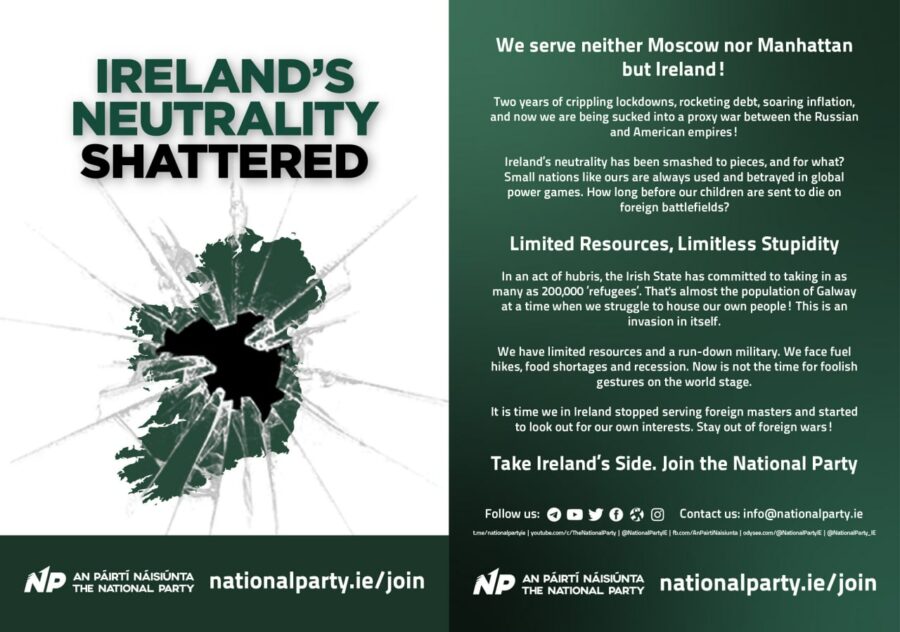