On the 26th of October, Irish citizens will be once again asked to vote in a referendum. This referendum won’t be about looking for a mandate to fix any of our current major societal crises. It won’t be about seeking explicit permission to take drastic action to end the housing and homeless crisis, it definitely won’t be about getting the public finances in order through some cunning initiative that needs public consent. So you might ask, why is our time being wasted here? Shouldn’t we be consulted on something that actually matters and could possibly help the Irish people?

Of course not, that would be “populist” you see.

The people of Ireland will be asked to remove what Irish progressives believe is anachronistic, archaic language from the Irish constitution – The Irish blasphemy provision. The left can’t comprehend such language or why it was inserted. They look at the puzzling wording with annoyance because their new progressive beliefs demand the traditions and institutions of their ancestors’ faith be knocked down. A minor support beam of the old culture, a painful reminder of what we once were, definitely not something we need to keep in the new Ireland. They certainly aren’t motivated by ideas like free expression and speech that’s for sure.

Charlie Flanagan as Minister for Justice has been pushed out on the canvas trail to sell this, a few photo ops down at the DART station will do here. He’s really worried you see that some countries at the United Nations (Charlie is diplomatic and won’t name names but we can guess who) are pointing to Ireland to validate their strict blasphemy laws. I wonder does he know that our friends in Europe, the Germans will fine you for blasphemous car stickers. 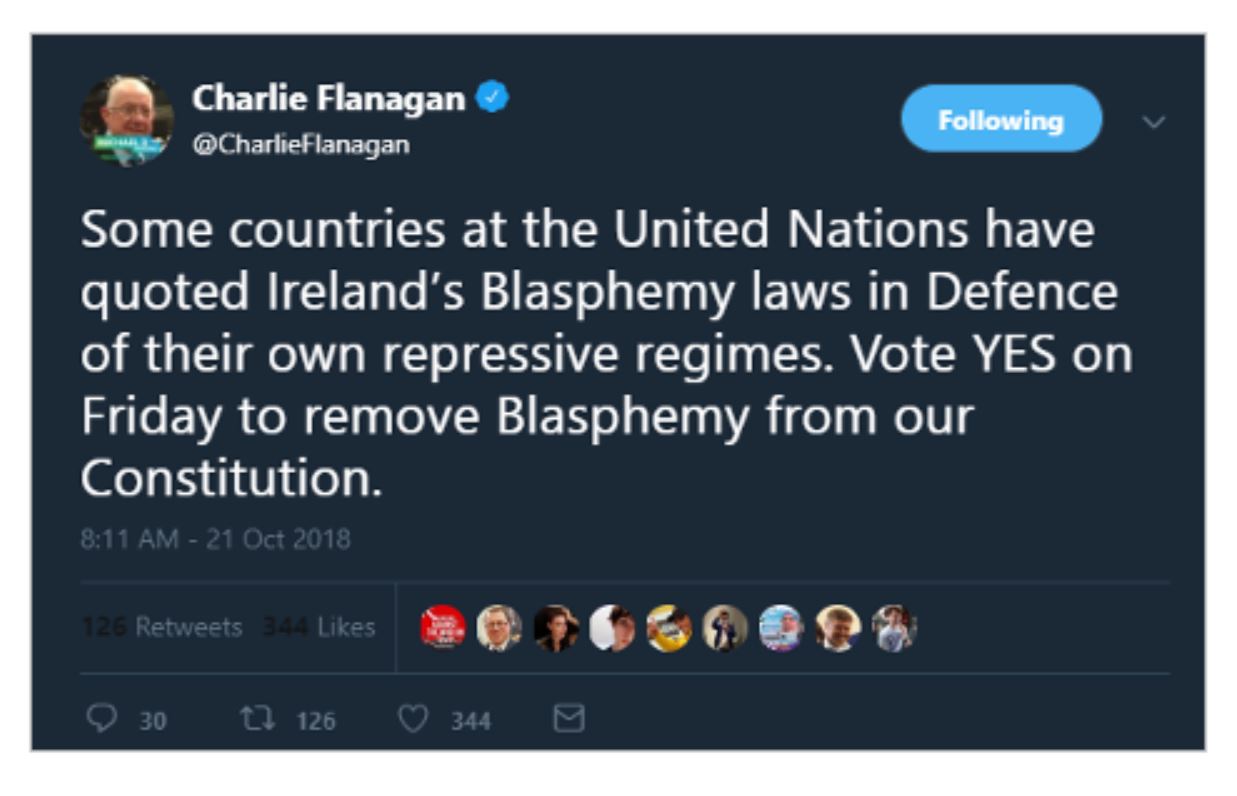 Why the focus on a provision which hasn’t been applied in prosecution for 160 years? Well, removing blasphemy from the constitution has been on their bucket list for quite a while but when UK comedian Stephen Fry appeared on Gay Byrne’s television show “The meaning of life” he said some critical things about the Christian God. Some concerned citizens went and complained under the laws that exist here to prosecute him for blasphemy. This of course spurred the left into action. Mr. Fry is considered a minor philosopher to them so it was highly embarrassing and after a flurry of horrified media articles, getting rid of the blasphemy provisions was back on the agenda. They were embarrassed that attention was drawn to particularities in Irish law.

Removing the blasphemy provisions from the constitution will be the start of something else. What the left want is to replace this law with new liberal compatible blasphemy laws, blasphemy against the new system of values of liberal progressivism. Unofficially we have this already, you might know you can be booted off your favourite social media platform, lose your job or be victim to a media witch hunt for stating certain facts without due respect to the tenets of equality. The worryingly named Incitement to Hatred Act 1989 will be updated with some teeth. The left here will push for the existing soft tyranny to become hard tyranny and institute hate-speech laws as has happened elsewhere in the West. It’s important to silence any dissent to the demographic transformation of Ireland 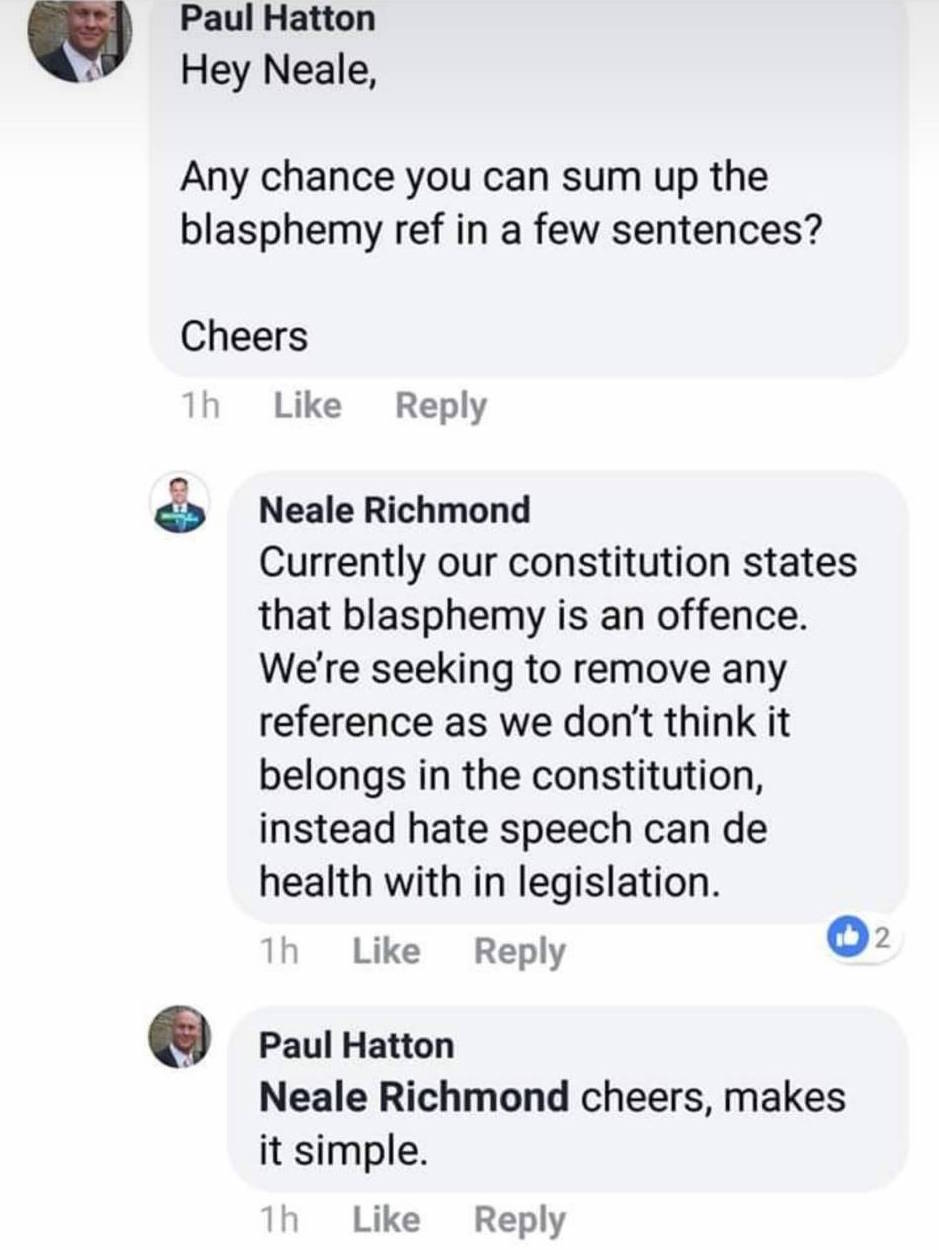 It’s tempting to just say let sleeping dogs lie, with saner people in power we might consider moving toward replacing the blasphemy law with some version of the American first amendment.

“Congress shall make no law respecting an establishment of religion, or prohibiting the free exercise thereof; or abridging the freedom of speech, or of the press, or the right of the people peaceably to assemble, and to petition the Government for a redress of grievances.”

While US law does not prevent you being booted off Twitter for saying different kinds of people thrive in different circumstances, it would at least prevent you getting locked up or fined for making uncivil jokes or mocking religion.

The left needs to rescind the blasphemy provisions in the Irish constitution in order to fully implement their programme and that programme does not include forbidding blasphemy against Christianity, it will most likely explicitly be about protecting designated victim groups from “offence”, further tightening the Immigration debate ban in Irish politics and of course creating a new revenue stream for the legal professions. The recent law change barring selective school admission only targeted Catholic schools. This is the modus operandi – to target the majority culture only.

I don’t think Charlie is sincere when he talks about “some countries” so I’ll be voting no. This referendum will of course pass, but it’s important we all keep an eye on what happens next.